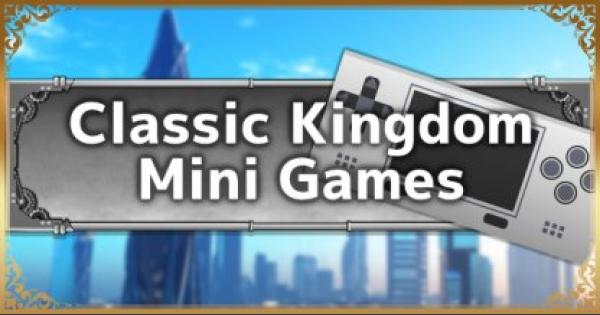 Check out the Classic Kingdom Mini Games for Kingdom Hearts 3! Find out the different games you can play, how to play them, strategies, and more!

What Is Classic Kingdom?

Classic Kingdom is a group of Mini Games that can be played in KH3. These Mini Games are reminiscent of the old LCD style games, which makes them easy to play for everyone!

Get Keyblade After Playing Mini Games

Once you've gathered all 23 Mini Games, play each one of them and set the high score. When you play all 23, you'll get the Classic Tone Keyblade.

No Need To Get Certain High Scores

You don't need to get a certain high score per Mini Game to get the Golden Mickey mark. You just need to play all 23 of them and set a personal high score in each mini game.

Kingdom Hearts Union Cross is an app on the smartphone which can be downloaded for free. After clearing the tutorial, you will also be able to play Classic Kingdom on that platform.

Use Spoon To Get On Table

When playing this Mini Game, quickly move across the floor and get on the spoon. The giant's left foot will step on one end and throw you onto the table.

To avoid getting hit by the giant's hands, hide behind the cups and fruit basket on the table. You can wait for the giant to move his hands out of the way before heading to the curtain's rope.

After opening the curtain, the candles at the top will swing from side to side. Use the pepper shaker to make the giant sneeze. Wait for the candles to swing towards you to land right on top of it.

MICKEY, THE MAIL PILOT - How To Play

Keep To The Middle Of The Screen

To give yourself a lot of space, try to keep Sora in the middle of the screen. You'll be able to see incoming flying ducks & mountains, allowing you to dodge them.

Fly High When It Rains

Bad weather will make you lose altitude so keep to the top of the screen when flying through the storms. This way, you won't accidentally hit any of the high mountain tops coming your way.

THE MUSICAL FARMER - How To Play

Time pipe switches correctly to send the eggs into the box. If done too late, the egg will fall to the floor and crack. Make sure to switch the pipe directions as soon as possible to avoid cracking eggs.

Replace The Basket When The Box Is Full

Use Ladders To Get Across Platforms

If you can't seem to get across the platforms, find the ladders to go up or down. These ladders will let you move around faster.

As you proceed through the stages, there will be more falling debris. Make sure to dodge them so you won't lose a life.

THE MAD DOCTOR - How To Play

Use Webs To Avoid Obstacles

When you're making your way to Mickey, you can use the spider webs on ceilings and climb on them to avoid obstacles coming at you from the ground.

Once you defeat the skull spider, you can climb up the rope to get to the third level. Skeletons will drop skulls left and right and you can just dodge them by moving the opposite direction.

MICKEY CUTS UP - How To Play

When moving Sora and the lawnmower around, you won't be able to go back to plots you've already passed. Try to plot your movement so that you'll be able to pass through them once and mow the entire lot.

TAXI TROUBLES - How To Play

Do your best to avoid any oil spills or incoming cars when playing this Mini Game. Encountering and hitting these obstacles will lower your gas levels.

It's best to pick up passengers one after the other and get their destinations all at once. This allows you to form the quickest path to their stops.

THE BARNYARD BATTLE - How To Play

This Mini Game will increase your score when you successfully time an attack to hit your enemy. Focus on hitting as much enemies as possible with great timing to go for a perfect score!

THE WAYWARD CANARY - How To Play

Capture All Canaries Within The Time Limit

Every stage in this Mini Game will have a time limit. You need to capture all canaries within this time frame in order to proceed to the next stage. If you don't, you'll lose

Avoid The Cats When Moving Around

When you're catching the canaries flying around, avoid hitting any of the cats you encounter. You will lose a life if you do so.

CAMPING OUT - How To Play

THE KARNIVAL KID - How To Play

Move While Cooking The Sausage

Arrange other food while the Sausage is cooking. Since it takes some time to cook, you will be able to do more things before the Sausage burns. You can get more points this way since you are multi-tasking.

HOW TO PLAY GOLF

HOW TO PLAY GOLF - How To Play

HOW TO PLAY GOLF Controls

Wait For Square To Land On Target

Move the direction of the golf swing using the controller buttons then wait for the square to land on your goal. This will ensure that the ball will land in the target area.

MICKEY'S CIRCUS - How To Play

The goal of this Mini Game is to pass the ball around to the different seals that appear. You'll get a higher score the longer you pass the ball. Use the action buttons to angle the pole to lead the ball towards the seal.

Use Obstacles To Direct Ball Movement

As the stage progresses, Donald will show up on the tightrope above the seal. You can use Donald to change the direction of the ball but be careful as you may not have full control of where the ball will go.

BARNYARD SPORTS - How To Play

You need to press the dash buttons alternatively to tell Sora to dash forward. Mash the buttons one after the other to build up enough momentum to defeat Mickey.

THE KLONDIKE KID - How To Play

When you catch up to Pete in this Mini Game, he'll start throwing barrels at you. You can use the action button to swing your Keyblade and hit the barrels back at Pete. This will earn you more points.

MICKEY'S KITTEN CATCH - How To Play

You Can Only Stack 4 Kittens

You can stack up to 4 kittens in your hands before they'll topple over and get lost. Be sure to turn the kittens you've stacked over to Mickey as soon as you reach a stack of 4!

Catching Fishes In The Deep Gives You A High Score

It is recommended that you catch the fish closer to the seafloor as catching these fish will net you a higher score when compared to the points given to fish caught near your boat.

BEACH PARTY - How To Play

Wait For Buried Tentacles To Show Up

During this Mini Game, the octopus will sometimes bury its tentacles. You need to wait for them to show up in order to hit them with your Keyblade.

If the octopus is able to grab one of your friends, immediately go up to that tentacle to hit it, this will instantly release your friend.

MICKEY'S PRISON ESCAPE - How To Play

Keep Moving To Avoid Getting Spotted

The guards in this Mini Game will keep moving in their search for you. Do the same and keep moving as well in order to make your way to the lever faster.

CAST OUT TO SEA

CAST OUT TO SEA - How To Play

CAST OUT TO SEA Controls

To extend the time you have per round, make sure to prioritize picking up bunches of bananas. These at 3+ seconds to your total time, allowing you to score more points in the Mini Game.

If you let a banana drop to the ground, you'll lose 1+ seconds in your total time. Avoid letting any bananas drop! And if you do, compensate by grabbing banana bunches instead.

HOW TO PLAY BASEBALL

HOW TO PLAY BASEBALL - How To Play

HOW TO PLAY BASEBALL Controls

To dupe Pete into making a strike, you can make curve balls by pressing the left & right buttons when you've thrown the ball. This will rapidly change the direction of your ball's trajectory.

MICKEY'S MECHANICAL MAN - How To Play

HOW TO PLAY BASEBALL Controls

Don't Punch When Monkey Is About To Hit You

You can tell when the monkey is about to hit you - it lifts its arms to get ready to punch you. To block, don't press any buttons and wait for him to land the hit.

Spam Punches When Monkey Has Arms Down

When the monkey has its arms down, you can spam your punches. Be careful to time your hits carefully as the gaps become smaller when the stages move forward.

MICKEY STEPS OUT - How To Play

When you progress through the stages, you'll come across notes that are located higher on the screen. You can press jump twice to double jump and reach them.

The best time to jump to avoid a puddle is the plank right before it. If you jump too early, you might land into the puddle itself.