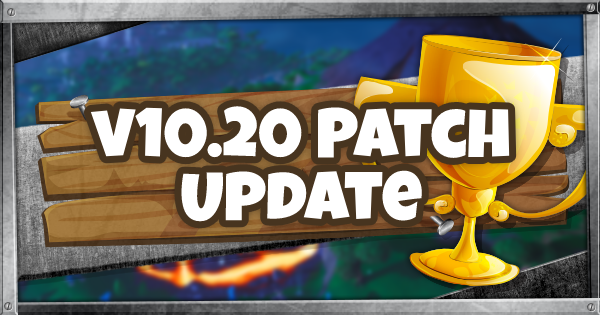 Find out everything to know about the 10.20 Patch Notes of patch update and content update here! This includes v10.20 details of new weapons, items, changes, and mor!!

The patch is is about 200MB and this is to fix cosmetic issues.

Lowered the spawn rate of the B.R.U.T.E in Storm phases 3-6 in core modes. Arena spawn rates will remain unchanged.

An electric new weapons comes to Fortnite with the v10.20 Content Update! It's a small update with no downtime so as soon as you install the update, you'll be able to log into the game.

The first ever throwable trap item, the Zapper attaches to both sides of a building piece and electrifies any enemy in its vicinity. It deals 50 damage to enemies caught within a tile from it.

The Floating Island powered by none other than the Cube is back, wrecking havoc in the once peaceful farm in Fatal Fields. It's a non-static location, meaning it will continuously move across the map!

This is in-game screenshot and it is located near Fatal Fields!

Floating Island is conformable in the mini map! The island will move around according to Epic!

The patch is mainly about fixing stability issues and has about 200 MB data size and requires time to update. Be sure to launch the launcher before new missions open on Aug 29!

You will notice two of new missions are now available! Check out out challenge guide to complete the challenges!

Mayhem Has Come to the Island

v10.20 is an exciting update as it not only brings with it a new throwable item, it also includes the Fortnite x Borderlands Collaboration! There's also other miscellaneous fixes and changes in store.

The island is about to get a bit more chaotic with the new Fortnite x Borderlands Collaboration! From cosmetic items to its very own section on the main island, the collaboration is the first major one for Season 10.

Check Out the Borderlands Collaboration Here

Check Out the Welcome to Pandora Challenges Here

Get Your Hands on Borderlands Cosmetic Items

Become the Psycho Bandit you've always wanted to be with the Psycho Skin! You can also get the ClapTrap Back Bling if you needed to have a constant reminder of Pandora on your back.

Pandora has come to the island itself with a rift zone greatly resembling the chaotic planet. Here you'll find special loot boxes and if you stay in it for a while, you'll even regenerate shield!

Protect yourself from gunfire from all sides with the Shield Bubble! This nifty little item will create a bubble that will block projectiles and explosions, keeping all those inside safe.

Blocks Projectiles from Inside & Outside of Bubble

The BRUTE received significant changes to its features, including to its rockets, dash, & spawn rate. These changes were implemented to both regular and competitive game modes.

Check Out the BRUTE Vehicle Here

The Storm Flip, Drum Gun, and Storm Scout Sniper Rifle have been vaulted. They are now gone from regular, competitive, and limited time modes unless specified.

Really hope for a improved version of moisty mire.