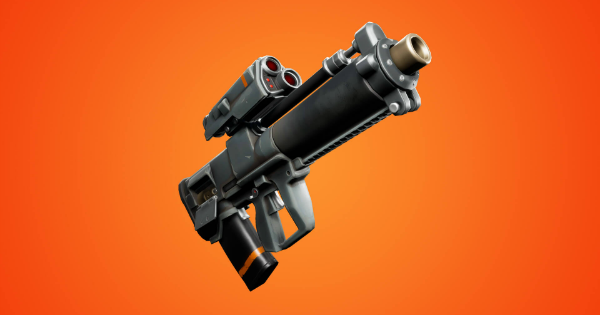 Arching and boucing shots and high destructive power, the Proximity Grenade Launcher can knock down enemies and structures with just a few well-placed shots!

The Proximity Grenade Launcher's best range lies between close to mid-range for better overall control. Although it has no damage falloff, it is not recommended for long-range engagements.

What makes the Proximity Grenade Launcher different from other launchers is arching and boucing trajectory for its shots. It shoots like a creature and explodes when in proximity of an opponent.

At any range, the Proximity Grenade Launcher will have the same damage output. It's range is pretty versatile as well which works well with this trait.

The Proximity Grenade Launcher can only fire 2 shots before having to reload which can put its user in a risky position as it takes a few seconds to reload.

This weapon does almost twice the damage against structures than it does with players. A shot from it can take down a wooden structure immediately.

Although Proximity Grenade Launcher is with an arching projectile, it has a scope, which allows you to shoot accurately, but be reminded that there is a bullet drop while traveling.

Use to Detect Enemies & Open Up Structure

The Proximity Grenade Launcher's strength is in its high damage against enemy structures. It explodes when enemies are in proximity. Use it to detect enemies in forts and take them down, exposing your enemies.

With the travel time of the grenade, you'll need to lead your shots to make them connect with your targets. Predict where your enemy is moving to and shoot a bit further from where they are to deal damage!

Make Sure to Have Cover Around

With its small magazine and long reload time, being caught in the open while reloading can easily lead to you being eliminated. Make sure to have enough materials ready to build cover or shoot where there is cover nearby.

Use to Initiate Fights

The Proximity Grenade Launcher is extremely strong in intiating team fights, but it's recommended to switch to another weapon once the fight breaks out. This is due to the weapon's small magazine, reload speed, and firing rate making it hard to use in a fast-paced fight.

Use Bounces To Attack From Side/Behind

Using bounces allows you to attack enemies from side or behind. Check buildings around enemies and do a surprise super attack!