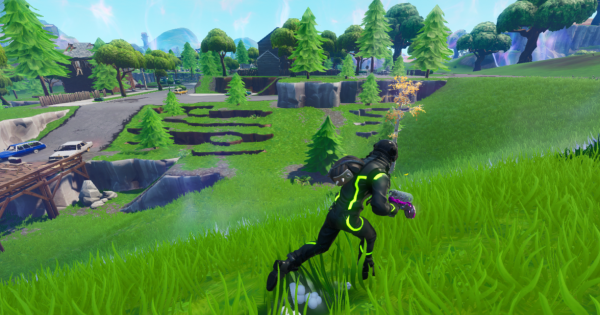 There's no drastic change to the overall map with the same biomes still there and no new ones introduced. Some POIs have changes, but most remain the same.

Rift Zones are probably the biggest map changes to the island as more and more are continually added throughout the season. What's even more different about them is they'll have unique rules or features within them.

From where Neo Tilted once stood, there is the Tilted Town now. Remember the rules: No building and no breaking down structures. Survive the fight with your guns and pure skills.

Retail Row has returned but it brings with it the Horde. Enter the area and the Horde will chase after you with gusto. It does have benefits through as Fiends drop good loot..

Check Out What are Fiends Here

There is now an Explosion Site in the map where the Rift Beacon at the Rec Center caused an explosion, creating a large crater with new Glitched Consumables.

Dusty Depot Returns to the Island

After being destroyed by the Meteor, Dusty Depot has made a grand return to the island in Season 10. Although there a bit of changes made to it, more specifically the meteor suspended right above it!

Other Changes to the Map

With the change done to Neo Tilted and Mega Mall, all of the Slip Stream networks have been removed from the map.

Heavily featured in Season 9, Sky Platforms have also been taken out of the island with Season 10.

There used to be a bit of Volcano Vents still active during Season 9, but seemingly, close to all are now inactive in Season 10.