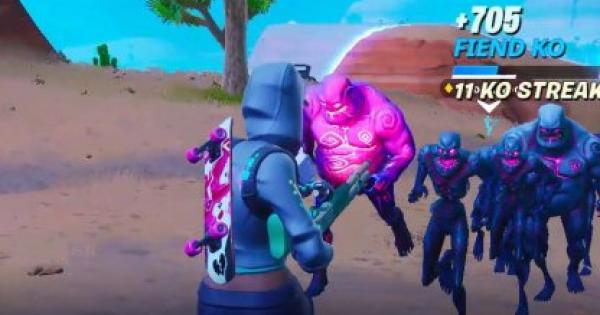 What Are Fiends? Brutes? Obelisks?

Horde Monsters like Fiends & Brutes are monsters that spawn from Obelisk. They automatically attack & run after you if you go too near to them.

Each Horde Monster Defeated will Earn You Points

Each one of the members of the Horde have a corresponding score to them. When a player defeats one, the score will be added to the overall squad score!

The Horde Rush Challenges & LTM all center around defeating the Hordes that have come to the island. Completing the challenges around them can even net you a nice reward!

Eliminating Horde Monsters will grant you a bit of shield. The number depends on which type of Horde Monster you eliminate.

Once destroyed, a Horde Monster can also drop loot such as shields, health kits, weapons & ammo.

Horde Fiends are smaller & slimmer. They deal a bit of damage to you when they strike.

Horde Brutes are bigger & have heavier damage than Horde Fiends. They are also visually larger than the Fiends.

Thrower Fiend throws fireballs. You get damaged when the fireball hits you.

Even when eliminated, these Brutes will still try to take you with them by causing an explosion! Get it down when other monsters are around it! It explodes and can kill other monsters.

Poison Fiends explode when it gets killed and sprinkle poisonous gas around it. When poisoned, players will continuously receive health damage over a short duration!

Chill Ranged Fiend throws iceballs. If you get hit, you will get an effect of chiller! Don't get slippery status!

The Mega Horde Brute is the rarest Horde Monster. It's big, gold, and has the highest damage & HP out of all types.

Boss Fiends are the final obstacle in the Horde Rush LTM. They're the toughest of the Horde, requiring multiple players to continuously deal damage to him to deplete its health.

Members of the Legion will take extra damage when shot in the head. By going for headshots, it will save you both time and bullets, two very important things when fighting the horde.

When fighting the Horde, it's best to thin out the weaker members of it first to lower the number of enemies coming after you. Once the number are lower, you can focus on taking down the tougher ones.

Make Sure to Have Full Health/Shields Before Fighting Horde

It's important to always have as much health and shields as you can before taking on the Horde. This is a necessity when fighting the Boss Fiend!