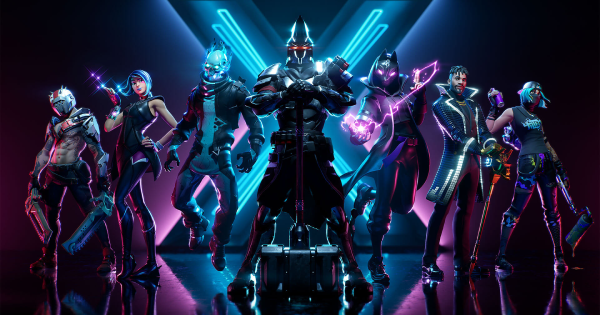 Find out everything to know about the 10.00 Patch Notes of patch update or content update here! This includes details on v10.00, the Season 10 Battle Pass rewards, & more!

As the first update of the season, 10.00 Content Update is expected to fine tune the features introduced in Season 10. As an added bonus, it will also add a new Sniper Rifle!

Scope out the Patch Notes when they're available. No downtime required.

According to the Fortnite's News Page, the Automatic Sniper Rifle is a long-range full-auto sniper rifle, a stark difference from the available single-shot Sniper Rifles in the game.

Tilted Town has reverted back to its state during the wild west! Special rules have been set in place in this town. Get to know them before venturing into the town.

No Building, No Breaking Structures

The rules are simple. No building, no breaking down the structures in the town. You'll have to fight against your enemies the old-fashioned way with weapons and your aiming skills.

Weapons that Only Spawn in Tilted Town

With the end of a season, another one starts! With a theme of "Out of Time", Season 10 brings together key elements of the previous seasons to create an exciting new era for the game!

The time grows near.

You're Out of Time in the New Season

The Zero Point has exploded, creating a time anomaly within the island! From Dusty Depot coming back to old skins being revamped, the past and the future has merged in this season!

Following the theme of the season, the Season 10 Battle Pass brings back old skins in a way you have never seen them before! It also includes new gliders, pickaxes, wraps, and other cosmetic items for you to collect!

Battle Pass uses will receive additional objectives to do with the new feature: MIssions! Complete them to get your hands on XP, Battle Stars, and exclusive cosmetic items.

Stomp and gun down any opponent who dares stand before you with the new vehicle: the B.R.U.T.E. The vehicle can be operated by up to people together so grab a friend to operate this awesome Mecha.

Check Out the B.R.U.T.E. Vehicle Here

The B.R.U.T.E.'s driver will have full control of the mecha's movement. They'll be able to dash, super jump, and stomp down on structures and enemies at will.

The passenger on the other hand will take control of the mecha's short-range and long-range weapons. Each B.R.U.T.E. comes with a shotgun and missile launcher that the passenger can use.

You can keep yourself safe from enemy fire by deploying a personal shield around you. This consumes 200 materials and will last for 5 seconds.

Dusty Depot is Back

Dusty Depot has been returned to its old self, but with an added bonus of the meteor stuck right above it! There are seems to be something else going on in the area as it's surrounded by a clear circle in the mini map.

The Zero Point continues to hover above Loot Lake even though it has exploded in the story trailer. Other than that, nothing else has changed in the area.

Red markings have appeared around the Monster's skeleton in the Mini Map. We're not sure yet what that means, but it seems foreboding.

Large Slip Stream has been Removed

The Large Slip Stream that goes around the middle of the map has been removed. The only Slip Streams left are the ones in Mega Mall and Neo Tilted.

The Sky Platforms have also been removed from the map. All 7 cannot be found in the Mini Map anymore.