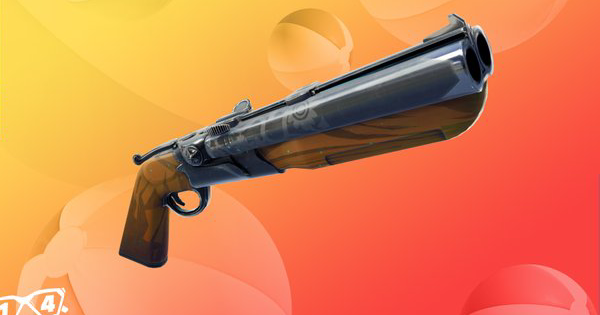 The Double Barrel Shotgun is an extremely high-damage short-range weapon at close range, but at the cost of a small magazine size, making it risky in Solo Mode. Playing on duo/squad can easily negate these problems!

Close-range combat is where the Double Barrel Shotgun is at its most dangerous. Anywhere outside of that range and it suffers from extreme damage drop off.

The Double Barrel Shotgun can be shot twice in rapid succession, easily melting enemy health and shields if both shots connect.

Retrained to close-range combat, the Double Barrel Shotgun is close to useless at any other range.

Compared to other shotguns, the Double Barrel Shotgun has a larger pellet spread that can easily catch moving enemies, but this is balanced out with lower critical damage at only 1.25x.

With its 2-ammo magazine size, 2-second weapon swap delay, and extremely short range, there is a lot of risks in using this weapon, but if used right, you can have an enemy down in seconds.

The Double Barrel Shotgun only comes in Epic and Legendary variations making it harder to find in the game compared to other shotguns.

Get Up Close and Personal

Use a mid-range weapon to rush down enemies and chip away their health as you close the distance. Once you're near enough, switch to the Double Barrel Shotgun and gun them down.

Empty your magazine at an enemy and build walls between you as you swap your weapons. Move to go around the wall to keep yourself safe as you swap weapons or reload.

Use as an Ambush Weapon

In Duos or Squads, have a teammate use a mid-range weapon to get the focus of an enemy while you flank them at their side. Shoot them down as they're distracted.