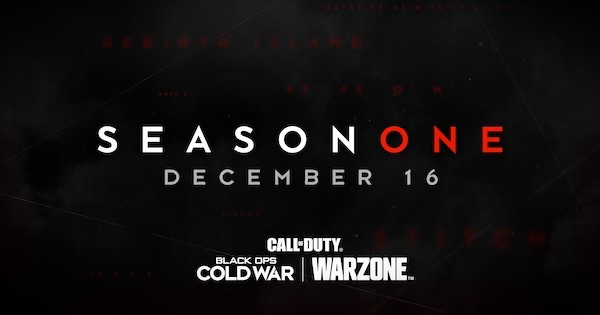 Check out this guide about the post release roadmap and Season 1 update summary for Call of Duty Black Ops Cold War (COD Cold War)! Know what comes next after release, & new content!!

The other half of Season 1 is now here. With its arrival are new maps, game modes, new Zombies mode, weapons, and other free content. Also, it has been announced that several free content will arrive in the coming weeks.

Rebirth Island or "Alcatraz" will join Verdansk as a playable map in Warzone. Here, players can roam around the island and explore new details connected to the world of Call of Duty Black Ops. With the new map, a new Gulag is also expected to arrive.

Highly anticipated with each season are the weapons. These Season 1 guns are can be had via the Battle Pass, completing their unlock requirements, or buying them via the ingame store.

With Season 1 comes new Operators that players can use in Cold War's multiplayer, Zombies Mode, or in Warzone. These Operators are available either via the Season 1 Battle Pass or the ingame store.

More choices, more fun. Season 1 is littered with new game modes that spice up the normal kill or be killed matches. These include drastic changes such as Prop Hunt, or faster matches like in Face Off and Gunfight. Expect to see more of these kinds of game modes during the course of Season 1.

Guides For The New Modes

Zombies Mode is now getting free content and updates this Season 1. In the mid-season update, we got Cranked Mode and new Onslaught maps. Following these is the continuation of Die Maschine, Firebase Z, a new story map for Zombies Mode.

The following game modes are limited-time event game modes. Due to them being time-limited features, they are now not part of the game mode selection.

Together with the roadmap, the release of the first Season of Call of Duty Black Ops Cold War has been revealed. Season 1 is expected to go live on December 16, 5 weeks after the game's release.

With the new season, players can grind to get Seasonal Prestige, previously known as Officer Ranks in Modern Warfare & Warzone. With this, players that get to higher ranks/levels can enjoy season-exclusive rewards that they can use to display their status. Note that Prestige Rank resets after every season.

Similar to previous Call of Duty titles, Black Ops Cold War will have a Battle Pass. The Battle Pass is seasonal and it offers rewards for each tiers the player has cleared. Note that in order to take full advantage of the season, players must buy the Battle Pass with COD Points which can then be bought with real money.

Like what was implemented in Call of Duty Modern Warfare, the Battle pass for COD Cold War will be integrated with Warzone & MW. This means that progress in those games affect each other, giving you access to unlockable weapons and skins from each one.