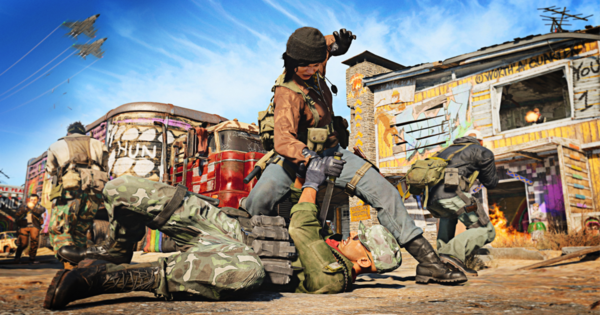 Read this guide to know how to do Finishing Moves (Finishers) in Call of Duty Black Ops Cold War (COD Cold War)! Know the commands, how to do finishers, equipping, tips, & more!!!

How To Do Finishing Moves (Finishers)

How To Do Finishing Move Summary

1. Get Behind Your Target

To perform a Finishing Move, you must position yourself behind the target within melee range first. Use your surroundings and the terrain to flank and get behind enemies.

2. Hold Down The Melee Command Key

A cinematic will play showing how you dominate your opponents gruesomely. Note that the cinematic may be interrupted by gunfire, change in footings, etc. Try to do a Finishing Move when the target is isolated.

How To Get More Finishing Moves (Finishers) - Tips

Many perks & equipments can give you an edge when trying sneak up on players. Ghost Perk hides you from digital surveillance while Assassin Perk shows off enemy directions when they're firing unsuppressed weapons.

Use Ninja, Ghost To Sneak

Footsteps gives away your presence and location, so use the Ninja Perk to conceal your footsteps. To avoid Scorestreaks from giving you away early, use Ghost Perk to stop showing up on the minimap. Both can be chosen at the same time with Perk Greed Wildcard.

Heavy weapon will drags down your mobility, making it hard to chase down opponents when you've finally got behind them. Knife & SMGs are one of the fastest weapons, letting you pursue with ease.

Check out All Weapons & Guns Here

Instead of simply chasing down your opponents, throw a stun or flash to slow them down is a viable tactic as well. Be sure to equip Quartermaster Perk to regenerate them as you go.

Check Out All Tacticals Here!

What Is A Finishing Move?

Finishing Move is a instant melee kill action that requires the player to get behind an opponent to initiate. It has different motions for each operator, and new sets will become available for use later.

Chekc out All Operators here!

Note that executing a Finishing Move still leaves you vulnerable from enemy attacks as you are rooted in place. Do finishing moves only if you are sure that there are no other enemies around.

Finishing Move has different cinematic for targets that are standing or on prone. Don't miss the opportunity to see each one if your target is on the ground.

Players can also do Finishing Moves in Warzone game modes. They can be bought, unlocked and equipped similar to that of the Cold War's base multiplayer.

Get 15 Finishing Moves To Unlock Stone

The operator Stone requires the player to make 15 finishing moves in order to unlock. Get sneaky now if you want the hooded former SAS operator to join your roster.

How To Get & Equip Finishing Moves

You can buy Finishing Moves as part of bundles using the in-game store. To purchase them, you need to purchase COD Points first.

Check Out The Store Guide Here!

Get From Battle Passes

Some Finishing Moves are locked behind Seasons Battle Passes, which require gameplay & leveling up to unlock. Some tier rewards would require the purchase of a Season Pass.

How To Equip Finishing Moves

You Can Preview Finishing Moves

Before purchasing a bundle, you can view their contents and see a preview of how they look like. Some special finishing moves would feature unique moves & weapons as your kill attacks animations!