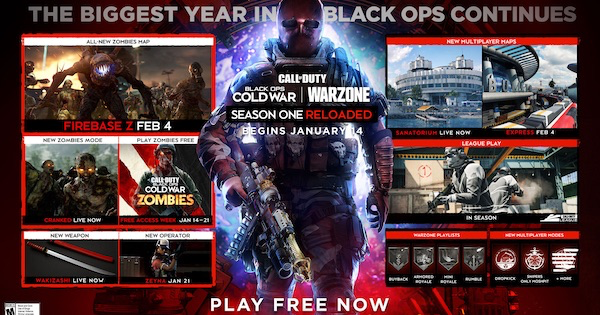 Check out this article about the mid-season update this Season 1 in Call of Duty Black Ops Cold War (COD CW) and Warzone! Get to know features, new maps, modes, weapons, and more!!!

More updates are slated to arrive on January 21 and February 4. Some of these new content include the operator bundle pack for Zeyna, Fire Base Z for Zombies, and the return of the Express map. Other updates include League Play and new game modes.

The update arrives together with a week-long free to play Zombies Mode. Players looking to test out and check this survival mode with friends can easily download it and play together for one whole week.

It has been officially announced that there will be a Double Weapon XP from January 15 up to January 19. Players can take advantage of this time to reach higher weapon levels and unlock more attachments!

The Wakizashi, joins the Sledgehammer and the Streetsweeper as the mid-season 1 additions to the growing weapons list. You do not need to pay to get the Wakizashi and you only have to fulfill its unlock requirements. The Wakizashi can be used in both Warzone and Cold War.

Update Coming To All Platforms

Regardless if you're playing on the PS4, XBox Series X, or on the PC, all players will get the mid-season update. Before playing, make sure to update your Call of Duty Black Ops Cold War to prevent any errors or crashes when running the game.

A sprawling new Fireteam map is expected to arrive this mid-season update. Sanatorium is a large map that features wide areas, structures, and a large body of water. Expect new air, land, and seas vehicles in this map.

Fight for control for a briefcase containing nuclear codes in this new 6v6 game mode. Dropkick is kind of a moving Hardpoint mode where-in players must get more points by maintaining control of the briefcase. The first team that gets 200 points wins with a nuclear send-off.

The following game modes are scheduled to appear in season. No definite dates as of the writing of this article.

Arriving next month is the classic Express Map from Black Ops 2. A mix between open spaces and structures, this map offers players a variety of combat situations. Also making its reappearance are the high-speed trains in this map. Express will also be part of the Onslaught map for Zombies mode.

Cranked mode is a classic game mode that forces players to continuously kill targets to survive. Once you get your first kill, you do get faster but you must kill to extend your time. If you fail to kill within the given time, you explode and die. This adds new dynamic to the already frenetic game mode.

Firebase Z continues the story of Die Maschine. After the destruction of "Projekt Endstation", the investigation now turns on another site codenamed "Firebase Z". This new map will be part of an updated expected to arrive on February 4.