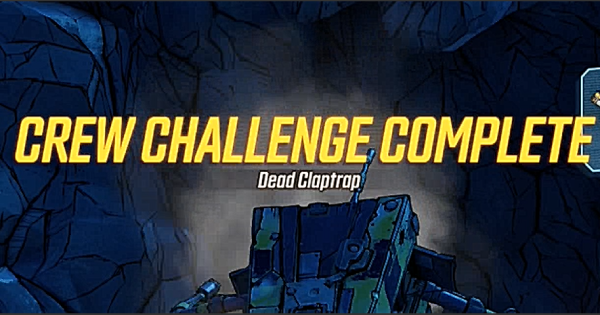 Find out everything there is to know about the Dead Claptrap challenges in Borderlands 3 here. This includes claptrap locations, how to get to them, and more!!!

What are Dead Claptrap?

Claptrap is in need of parts and the only place you can get them is from dead CL4P-TP units scattered across the worlds. There's at least one in most maps.

Dead Claptraps are unmarked in the maps. You'll need to discover their location before they'll appear there. This is regardless of whether you salvaged it already or not.

Complete Them All to Get the Baby Maker ++

Once you get all of the Dead Claptraps, you'll find a mail from Veronica with the Baby Maker ++. It's a sure way of getting this Legendary weapon!

Adds Another NPC to Sanctuary

A new Claptrap called Veronica will be stationed in Sanctuary after salvaging parts from all Dead Claptraps. Head on over to Claptrap's area to activate her.

The first Dead Claptrap in Ascension Bluff is found inside Ellie's Garage. It's in the the far end of the Race Track area behind a fence of cars.

The second one can be found right in front of the The Drought - Highway Fast Travel Station. It's on top of a rundown car.

There's a Dead Claptrap in a small space near the screen in the Sin-A-Plex. To the right of the screen is a cargo box where you'll find the claptrap.

1. Behind the Roller Coaster

The Dead Claptrap is hidden under one of the buildings in the Stack Decked. The entrance is a red lit room under the walkway with a hole to where the Claptrap is.

Continue through Konrad's Hold until you get to the Fallback Tracks. Go to where the upward conveyor belt is since the Dead Claptrap is right in front of it.

From the Last Stand Yard, head to the end of the rails where it drops down to a nest of Varkids. It's in front of the ravine right on top of a small cargo box.

Cathedral of the Twin Gods

Inside the COV 13 Building

You'll find the Dead Claptrap inside the COV 13 Building where you need to crouch to get inside. Its entrance is blocked by 3 wooden planks that you can melee.

Outside of Fort Pissoff

This Claptrap is in the area between Fort Pissoff and the Drop Pod Fast Travel Station. It's stuck in Ratch Nest inside a small cave.

Near the Dynasty Diner

You'll find this Claptrap broken at the end of a set of stairs near the Dynasty Diner. The stairs are to the left when facing the double stairs going to the 2nd floor.

Head down the the lower end of the Downtown Square to get to the Dead Claptrap there. Look for the small corner with the Welcome Home neon sign and you'll see it.

From the Fast Travel Station, keep going straight then climb up the building with the yellow paint. Head right and up the stairs. The Dead Claptrap is on top of the shed next to the stairs.

You'll need to go through most of Skywell-27 before you can get this Claptrap. It's in a small space that you'll need to jump to. The space itself is lit with a red light.

2. After the Maintenance Corridor

You'll need to do a bit of climbing to get to this Claptrap. Right after exiting the Maintenance Corridor, continue forward until you see a high rock formation. Climb the one opposite it and jump to get to the Claptrap!

Inside one of the rooms in the Lobby of Self-Actualization is a Dead Claptrap. Head up to the second floor and you'll find it on the right side of the building.

The Dead Claptrap in the Neon Arterial is in the tracks of the Green Diamond Platform. Be careful when getting it because you'll be killed if you get hit by a passing train.

Continue across the Windward Plaza until you get to a building with a Drinks neon sigh. Go right and continue forward till you get to another platform where the Dead Claptrap is.

After the long bridge, go straight then climb up the pink building with multiple floors. At its very top is the Dead Claptrap.

The base camp of Tyreen's champions has one of the Dead Claptraps. It's on the side of the red building right under the platform. It's beside the stairs.

2. Near the Lumberton Junction

The second Claptrap isn't that far off from where the first one is. Exit the Lumberton Junction where it connects with the road then turn right until you see a pool surrounded by giant roots. The Claptrap is between the roots near the shed.

1. Inside the Building in Hector's Lament

After the New-U Station in the first building in Hector's Lament, go left and slide through the small opening. The Claptrap should be in the second room still being showered by the broken pipe.

2. The Building Left of The Yard

There's another building to the left of the Yard that you can enter. Go through it then enter the doorway on the right side to get to the Claptrap strapped to the table.

There's a hidden pathway under a Waterfall in Voracious Canopy. Climb through the path and you'll eventually get to the Dead Claptrap. There are also Eridium Crystals along the way for you to farm.

There is a specific shack in the Ambermire that's being used as a nest. An unfortunate Claptrap has found death in the sticky mess.

2. Area Behind the Dam

Another Claptrap can be found in the area behind the Dam in the Ambermire. It's beside a broken cargo holder in the swamp.

1. Close to the Giant Cube

One of the Dead Claptrap in Desolation's Edge can be found close to the Giant Floating Cube. Its exact location is marked by a smoke trail from the destroyed rocket ship.

The next dead Claptrap is in Quietus Pike. Continue through the area then turn left right before the huge staircase going to a cathedral of sorts. You'll find the dead Claptrap there tangled in vines.

You'll find the Claptrap near the Tazendeer Ruins Fast Travel Station. In the large square area, there is a small space where you will find a dead Claptrap all tangled up.

2. Near the Last House

To get to this Claptrap, you'll have to fight a few Maliwan soldiers along the way. The entrance is to the right of the New-U station. Continue straight to find the Claptrap under the waterfalls.

The Pyre of Stars

1. After the Eden-6 Pedestal

Jump across the ravine after the Eden-6 Pedestal since the Dead Claptrap is there. It's in a small platform a jump from the main path.