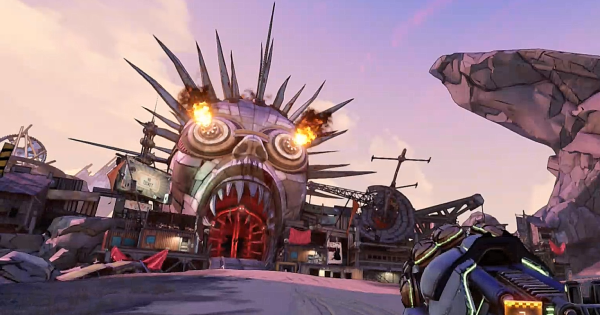 5. Do AoE Damage With Barrels

When clearing the area of enemies, shoot at barrels as they deal big damage when they explode. They also deal elemental damage depending on what kind of barrel you hit.

6. Use Corrosive Against Big Donny

Big Donny will have a yellow shield and this can be whittled down by using a corrosive weapon. Bring one to the battle to down Big Donny fast.

Corrosive Damage Is Good Vs. The Big D

Big Donny's "The Big D" also has a yellow shield bar and can easily be brought down with corrosive damage.

Getting To Gate Has Several Areas With Enemies

Getting to the Carnivora Gate will be long-winded, with several areas chock full with different enemies. Be prepared to face off with them as you head to your destination.

Turrets can hit you hard and take your shield down almost instantly. Use corrosive weapons and focus fire on the turrets so they won't interfere with your fights.

2. Fuel Lines Are Highlighted On Carnivora

When you're chasing after Carnivora, shoot at the highlighted fuel tanks on the lower half of its body.

4. Transmission Is Underneath Carnivora

To destroy Carnivora's transmission, drive underneath it and shoot at it. You can also throw grenades to deal more damage to the machine's part.

The main tank of the Carnivora can be found on the machine's back. It is very large and hard to miss, making it an easy target.

Another long-winded phase in this mission, you'll have to go through the Guts of Carnivora in search of Tannis. You'll have to move through different area and fight many enemies to finally get to her.

With the sheer amount of enemies you'll be fighting, it's best to aim for head shots to deal heavy & critical damage. You'll down enemies faster, allowing you to move through areas more efficiently.

Use Corrosive Damage On The Tink-Train

When you face The Tink-Train, he'll have a yellow bar above his HP. Corrosive damage will be effective against him.

Pain & Terror's mech has several weak spots. Its glowing red eyes are vulnerable to corrosive damage so make sure to pack a corrosive weapon in this boss fight.

You can also deal critical hits around the mech's body, as long as they are red. The gas tank in its back, the fuse boxes around its armpits, and belly are all spots that are vulnerable to critical hits.

Run Away From Knife Chop

The mech will also summon a knife, raise it up, and chop down several times towards one direction. You have to run away from it and not towards it to avoid taking damage.

Another weapon the mech pulls out a flat metal plate with sharp stakes underneath. Look at the floor to know where it's gonna land then crouch slide to escape it.

When the robot moves down and summons a circling blade, you need to either jump or crouch to avoid getting hurt from it. Check the height of the blade to know if you'll jump or crouch.

The floor will also glow red in parts or as a whole, dealing fire damage to those who remain standing on them. Jump or run away to keep from getting hit.

Dodge Or Move To Side To Avoid Spinning Blades

The robot will also send vertical spinning blades towards you. Keep mobile, dodge & move to the side to avoid getting hit by the blades.

Core Appears When Yellow Bar Is Down

When you deplete the robot's yellow health bar, the Eridium Core will appear. Use your most powerful weapon to deal damage to it and destroy it quickly as it also sends out lasers that can hurt you.

How do you find blood drive mission

How do you get to blood drive