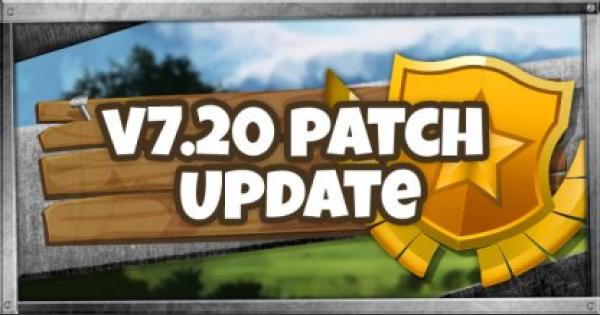 Learn all about Fortnite Battle Royale's v7.20 patch update in this guide! This includes the release of the Scoped Revolver and the Gliders Item, as well as Sniper Rifle buffs.

The v7.20 patch will include the release of a new weapon, the Scoped Revolver, and the return of Glider redeployment through a new item! Some building and weapon rarity changes will also be applied in the patch.

Shoot down enemies at across ranges! The Scoped Revolver's extended range will allow you to accurately shoot targets at a distance.

Providing mobility and utility, the Gliders item lets player redeploy their gliders after jumping/falling from a certain height. The item can be found in most loot sources and will take up an inventory space.

The Gliders item has 10 charges that will be consumed every time a player uses their Glider. Once all charges are consumed, it will be gone from your inventory.

Skydiving Mode Does Not Count for Gliders

Deploying your Glider after using Launch Pads, Rift-to-Go, and LTM respawns will not consume a Gliders charge since it puts you in Skydiving mode, similar to when you jump off the Battle Bus.

A few of the Sniper Rifles received a buff in which they will have the same projectile trajectory as the Heavy Sniper Rifle. This means less bullet drop with every shot!

Sniper Rifles Included in this Update

An overheating mechanic has been added for Miniguns to limit continuous fire. The Minigun will overheat after every 6 seconds of continuous use.This is counteracted by its wind-up time being reduced by 37%.

Check Out the Minigun Weapon Stats

A number of weapons and items have also received an update to their rarities as part of the v7.20 patch.

Starting in the next update, building walls that are 70% underground/water will automatically create a connecting piece above it with no additional material use! The joining piece will also adopt the building material of the original one.

Some trap items will appear more frequently as they have received an increase in their spawn chance in this update. This includes the Cozy Campfire, Lauch Pad, and Mounted Turret.