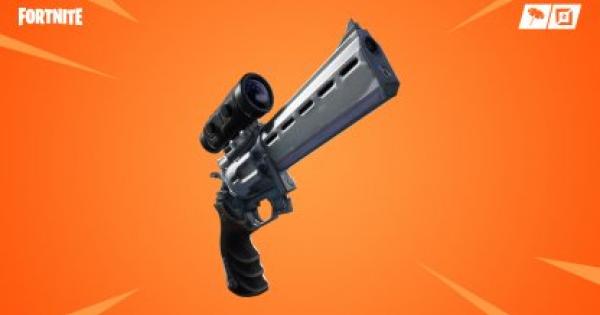 The Scoped Revolver is a powerful weapon capable of taking out enemies in a few shots. However, against team engagement, it lags behind due to its firing speed and bullet capacity.

Thanks to its scope, the Scoped Revolver is capable of accurately shooting down targets from mid- to long-range. At close range, it is less reliable without the sights.

The Scoped Revolver has the farthest range compared to other handguns in the game. Its scope is a great help against mid- to long-range enemies.

A drawback of the Scoped Revolver is in its small bullet capabity. With its 6-bullet chamber, it can only shoots 6 times before having to reload.

Unlike Sniper Rifles, the Scoped Revolver doesn't have bullet travel time and bullet drop. It will immediately connect bullets to its target upon being shot.

With a small magazine, you'll need to make every shot count. Start battles against enemies with a headshot to do as much as damage as possible, then finish them off with body shots.

The Scoped Revolver can easily win peeking battles against snipers when done right. Take advantage of its lacks of bullet travel time to outshoot other enemies peeking around corners.