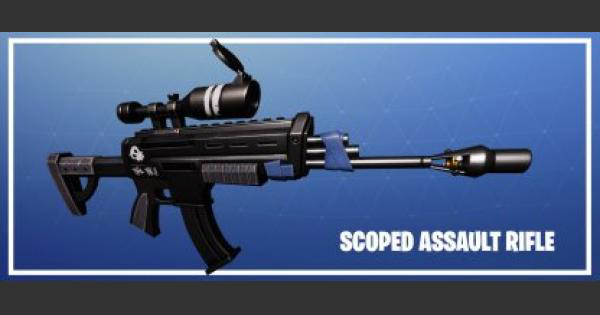 Good overall weapon to have for all available game modes. It's a good weapon to use for harassing enemy players with its accuracy despite the moderate DPS.

Best used for mid to very long range attacks. It is not recommended for close range battles.

This allows you to accurately aim at enemy players while staying out of their effective range.

No bullet drop off

Unlike other sniper rifles that require aim adjustments, the Scoped Assault Rifle is accurate even at very long distances and hits instantly so it's very good to use against moving players even at long distances.

Although the accuracy is good, it lacks the firepower to finish off opponents.

Aim for headshots at medium distances to take advantage of the scope's accuracy. Even with the moderate damage, it would be possible to take down enemies when the shot connects.

Make sure to carry a close range weapon like an SMG in case enemy players get to close.

It's possible that enemy players will also be carrying weapons capable of reaching your position so don't get too complacent about being out of their range.