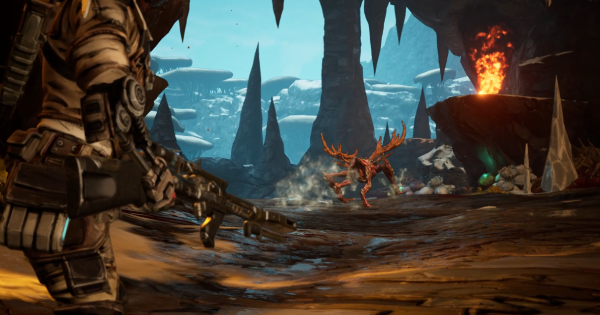 Borderlands 3 | BL3
The Horror in the Woods - Mission Walkthrough

Read this Borderlands 3 Guns, Love, and Tentacles walkthrough of "The Horror in the Woods" main mission. Including mission tips, boss fight battles, and more!!!

The Horror in the Woods Walkthrough

The Horror in the Woods Walkthrough Chart

Most of the enemies you will face for this quest are weak to fire and corrosive attacks. Make a Fire Weapon your main and just switch to a corrosive when you meet any of the armored enemies.

You can easily find the Wendigo's track since it's encircled by snow and the print itself glows a bright red. Make sure to interact with it to progress the quest.

Requires a Bit of Parkouring

The Dungs are placed in high places, requiring players to do a bit of platforming to get to them. When jumping, give it a running start to be able to make the gap.

Recipe for the Flaming Maw Brew

Jump When He Does Shockwave Attacks

You can easily dodge Eista's shockwave attacks by jumping since they're all ground-based. Keep an eye on him as he does his attacks to get the general direction of the shockwaves.

Keep your distance from Eista and you won't be damaged by him. Shoot him down as he tries to chase after you throughout the arena.

Has High Resistance to Elemental Damage

The Wendigo has high resistance against fire and corrosive damage. This means your weapons with these elements won't be able to deal as much damage as they should when used against the boss.

Shoot It when It's On Platforms

During the fight, the Wendigo will go to higher ground for a brief period. You can still damage it from up there with your weapons so take the opportunity to deal damage against it.

When it's on platforms, there's a chance that it can rear up and show its belly, which is its weakspot. Focus on it and if you deal enough damage, it will fall to the ground and be incapacitated for a few seconds.

Head to your left or your right when you see the Wendigo rearing a charge towards you. You can also trick it into hitting its head on a fallen rock and incapacitate it.

Reload Game if Balls Glitch Out

In the event that one or both of its quest-required balls glitch out, reload the save and the Wendigo's body will be gone, giving you access to its balls.