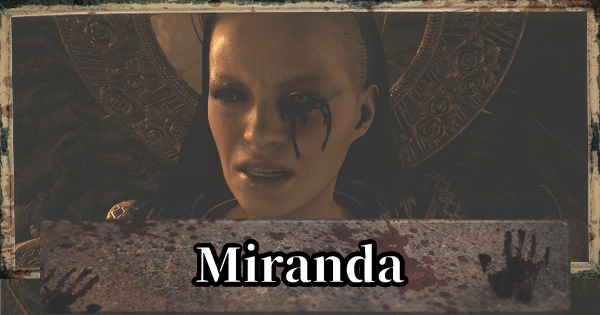 Miranda - Tips & How To Beat

Stock Up On Weapons Before Battle

Miranda is the final boss fought in the Ceremony Site area. Stack up on weapons especially Ammo for Shotguns and Sniper Rifles. Make sure to upgrade your weaponry too.

Powerful weapons such as magnums and grenades are particularly recommended for the final phase. However, due to the limited amount of bullets of these weapons, you may have to switch between different types as you go along.

Mother Miranda will be mostly moving slowly at Phase 1, making it relatively easy to clear as long as you keep a safe distance. Maximize the use of long-range weapons.

Hide Behind Trees & Attack From There

If you notice that suddenly trees start to spring out from left to right, she'll be attacking right from the center of that structure. If you hide behind the trees, you won't get hit by her attacks. You can also attack through the gaps between the trees. Take note that she'll attack from the side at the end of this attack.

If you inflict a certain level of damage on her, she'll shift to Phase 2. She'll grow legs on her back and will be moving quite quickly in this form. Because of this, it'll be difficult to avoid getting hit, which is why it's important to focus on guarding yourself while keeping a safe distance between you and her.

Her jump attacks are characterized by her going up on higher ground. You can easily avoid getting hit by running forward.

Phase 3 will have Mother Miranda growing wings which will enable her to fly. This will mostly be an aerial battle, so utilize your long-range weapons that can deal plenty of damage like Sniper Rifles and Magnums.

Avoid Her Shots Of Light By Moving Left & Right

When you see 3 orbs of light by her head, she's preparing for a shooting attack. You can avoid getting hit by moving left & right. They may also be stopped midway if you counter them with hits, so shoot at them one by one, or use a grenade to destroy all of her 3 shots at once.

Prevent Aerial Attack By Shooting At Her Head

When you notice her flying up in the air as if collecting light & gas as she prepares to attack, quickly aim at her head and shoot with a Sniper to prevent it completley.

After you inflict a certain level of damage at Phase 3, she'll turn dark and grey for a moment, signaling the start of her attack loop of all phases. The attack patterns remain the same, so remember your strategies and keep fighting till the end.

No Need To Attack During Dark Phase

Mother Miranda will only appear right before she attacks, so there's no need to keep attacking during this dark phase. She'll attack after a certain period of time, so focus on avoiding that first attack instead.

Miranda will glide in the air and attack you. This attacks will heavily damage you so make sure to focus on dodging or blocking these attacks.

Aim For The Head To Deal Most Damage

In the first phase of the battle, you have a clear view of the head of Miranda. Make use of this short phase to easily deal damage to the boss. Using shotguns like M1897 is recommended for this stage.

Prepare To Guard When Miranda Glides Up

Miranda can glide high up or climb a platform and leap towards you. Guard to avoid damage from this attack. After blocking the attack, the boss will be open for damage so make sure to use this instance to attack the boss.

Snipe The Head After The Boss Backs Off

After successfully blocking the leap attack, the boss will move back enabling you to easily snipe its head. Make use of this moment to deal more damage.

Stop Orb Attacks By Shooting Them

Miranda can summon three powerful orbs during battle this will severely damage you so make sure to shoot them with rifle and make them explode and stop it from damaging you.

Final Boss Of The Game

Mother Miranda is the final boss in Resident Evil Village. After finishing this boss, you will reach the ending of the game. Miranda is the "ruler" of the 4 lords and the head honcho of the village.

For the darkness round all you need to do is run around the outside in a circle. The moment you see Miranda in front of you turn around and head the other direction

Something to note about the Phase 3 darkness part, you can actually end it early by using a flashbang round, saving some time and making it a bit easier to get through.