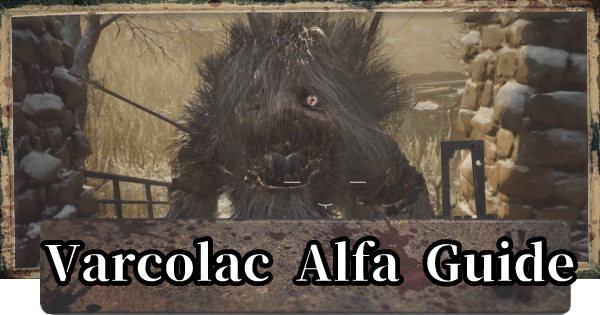 Check Out All Challenges Here

Appears In The Fallow Plot

Varcolac Alfa will appear in the Fallow Plot area, in the eastern side of the map. It will initially be hidden in the vegetation, but if you get close you'll hear its voice. If you get too close it's likely to attack, so be careful.

▲ Though easily mistakable for a scarecrow, that is in fact the Varcolac Alfa in the field of wheat

The Varcolac Alfa will only spawn after you've defeated Moreau in the Reservoir. Don't expect to spot this enemy in the Fallow Plot at any point before!

Trophy & Achievement Only Obtainable Before End Of Stronghold

The achievements related to the Varcolac Alfa (Leader of the Pack) can only be gained before you finish the Stronghold. If you finish it and proceed to the Factory, you won't be able to go back, so be careful.

How To Beat The Varcolac Alfa (Werewolf Boss)

Don't Have To Kill Him On Your First Playthrough

The Varcolac Alfa has a substantial amount of HP, so bringing him down will take time. You'll need to use up a lot of bullets, so it might not be a good idea to go for this boss on your first playthrough.

Having Infinite Ammo Weapons Makes This Much Easier

This enemy's attack pattern is more or less in line with the other Varcolacs you've seen. Hitting it with the grenade launcher or a land mine will cause it to flinch, so make sure to use these frequently. If you have an infinite ammo grenade launcher, that will make things even easier.

Fight In A Clear, Open Space

Fighting in the middle of the field will be rough in terms of visibility. Try to lure the Alfa out into an open area, as this will help you avoid attacks and use your ammo more efficiently.

Leashes If You Wander Too Far

If you move too far away from the Fallow Plot, the Varcolac Alfa will reset and return to its original position. Be wary of this as you fight.

Defeat To Get Crystal Ancient Beast

Defeating the Varcolac Alfa will drop the Crystal Ancient Beast treasure. This can be sold for a whopping 80,000 Lei, so you'll be well compensated for going through the trouble of killing this foe.