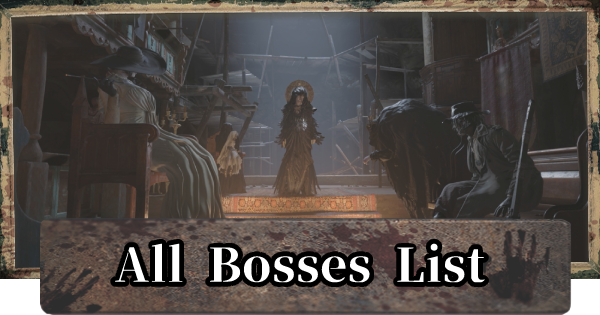 A list of all bosses in Resident Evil Village (Resident Evil 8). Learn all villains, boss fights in order, hidden bosses, their characteristics & weaknesses for RE 8 here!!!

Living with Lady Dimitrescu are her three daughters, Bela, Cassandra and Daniela. When encountered inside the castle, they would seem invulnerable but they are weak to cold air and can be defeated by destroying the walls of the castle and exposing them to the environment outside.

Lady Dimitrescu is a very, very tall vampire lady who took social media by storm a few months ago. She appears in-game during chapter two as she tries to chase you down and kill you. She transforms into a "Mutated Dimitrescu" and similar to her daughters, can be defeated by destroying the castle walls and exposing her to cold weather.

A woman clad entirely in black who carries with an eerie, unsettling puppet named Angie. She is another Lord in the service of Mother Miranda. She apparently lives in a "fog-filled valley". You will encounter the puppeteer at the House Beneviento as the main enemy of that area.

Salvatore Moreau is a disfigured merman-like creature with a huge humped back. He "hides away in a reservoir", suggesting the existence of a watery zone in the vicinity of the village. This boss is encountered at Drown Houses.

A fur-covered monsters that you will meet at Stronghold. It wields a gigantic hammer and can call out minions.

Heisenberg brandishes around a large hammer and resides in a factory located in the outskirts of the village. He has indeed been confirmed to be one of the four "Lords" who serve Mother Miranda. Heisenberg has a mutated form which is a bigger and more dangerous version of the boss.

While you are controlling Chris Redfield in the Village, you will encounter a monster covered with fur and tentacles. He wields a giant mace and does combos with it and the tentacles attached to his body. Hitting his tentacles with various weapon would damage the boss.

Seemingly the head honcho of the village, Mother Miranda is the "ruler" of the other 4 lords. She is one of the main antagonist in RE8 and is encountered Ceremony Site.