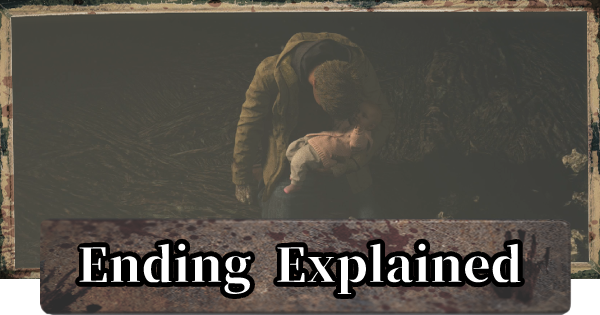 Learn all about the story spoilers and ending for Resident Evil Village (Resident Evil 8, RE8). Does Ethan die? Who is Mother Miranda and her relationship to Eveline? Find out and more in this guide!!!

After Being "Killed" By Mother Miranda, Ethan Awakens

During the fight with Heisenberg, Ethan was ambushed by Mother Miranda and presumably killed. He then dreams of Eveline.

Ethan Was Revealed As Molded, Killed 3 Years Ago

In the dream, Ethan meets with Eveline who reveals that Ethan had already died years ago. That his body is made of Mold, which explains how he could survive amputations and other injuries.

He wills himself awake and sees that he's in Duke's carriage. He ask for the merchant to bring him to Miranda's place to take back his daughter.

Ethan arrives just after Mother Miranda reassembles Rose. He grabs him from her and they start their final fight against each other.

Having sustained injuries that even his body couldn't handle, Ethan starts to calcify after beating Mother Miranda. He takes Rose and Chris Redfield arrives. He helps the two and states that they have a bomb has been planted to finally destroy Mother Miranda.

Chris Takes Rose While Ethan Stays To Detonate The Bomb

Chris and Ethan tries to escape, but Ethan was falling apart. Saying his final words to Chris, he drapes his jacket to Rose and asks for Chris to take care of her. They get separated with Ethan holding the bomb's detonator.

All on his own now, Ethan faces the swarming mass that was once Mother Miranda and detonates the bomb. The explosion takes out the whole village and presumably, Ethan and Mother Miranda with it.

Rose Is Reunited With Mia

Chris Redfield makes it to the chopper where Mia waits. She is finally with Rose, but Ethan was nowhere in sight. She asks for him and Chris reveals Ethan's sacrifice.

During their escape, a downed soldier was unmasked and shown to Chris. It's a Bioweapon sent by the BSAA. Chris is furious and sets course for the BSAA Europe HQ.

After the ending credits, we see a young woman visiting Ethan Winter's grave. It's then revealed to be Rose, Ethan's daughter.

Although it looks to be a time skip, the exact time that passed was not revealed. This is rather confusing since Rose, having the powers of Eveline, could also experience the latter's speed aging.

What was sure was that Rose now works for Chris Redfield, having been visited by her retainer. She doesn't take it nicely when called Eveline and reveals she too has powers.

Uncofirmed Dead, But Considered As Dead

Ethan's sacrifice is seen currently as final, with his gravestone being revealed and a final goodbye to his character. The arc words "His Story Comes To A Close" from the trailers seems to have been fulfilled.

Possible To Return In Future

Resident Evil is a franchise that has brought back characters thought dead before. There is a possibility that Ethan could come back since it's not entirely impossible and there are work arounds to it.

Calcified, But Could Return From The Dead

In Resident Evil 7, Jack had also calcified during his boss battle with Ethan, but later resurfaced again as part of Zoe's DLC. Calcification does not mean death and there's a very slim chance that as a molded, he could have survived the explosion.

Could Show Up In The Hive Mind

Similar to how Ethan was able to converse with Jack in Resident Evil 7 in the Hive Mind, Ethan could also do the same with Rose in a future installment.

Who Is Mother Miranda & Her Connection With Eveline?

Mother Miranda first discovered the mold in an underground cave in the very same village featured in Resident Evil 8. She's revealed to be more than 100+ years old, having been alive during the Spanish Flu outbreak.

Unfortunately, Mother Miranda's daughter met a cruel fate. She contracted and succumbed to the Spanish Flu and died.

Seeks To Revive Her Daughter Through Experiments

Mother Miranda grieved for her daughter and sought to bring her back from the dead. She started to experiment with humans in order to create a Vessel that could hold her daughter back.

4 Lords & Lycans Are Experiments To Create A Vessel

These experiments included the 4 Lords and the Lycans that Ethan fights in the game. There were all considered failures as vessels.

The Megamycete which gave Mother Miranda her powers hold the DNA of Eva. She plans on combining the Megamycete with the Vessel to bring back Eva.

Originally The One Who Taught Spencer, Founder Of Umbrella

In her quest to bring back her daughter, she encounters Spencer, the very founder of Umbrella. She guided him through the foundation of Umbrella and could be seen working in the company in its early years.

Reason Why Umbrella Symbol Is All Over The Village

Going around the village, you will notice the Umbrella Company's signature logo plastered in different places and structures. This ties in the connection between Umbrella and Mother Miranda.

Worked With The Connections To Create Eveline

Mother Miranda then reached out to The Connections, another company that works to create Bioweapons. Giving them Eva's DNA and the mold, they create the E-series experiment which resulted in Eveline.

Same Company That Mia Worked For In RE7

The Connections is the same company that Mia worked for in Resident Evil 7. She was tasked in transporting Eveline, but this resulted in the mold being released and them meeting the Baker's family.

The Connections was also the one to inform Mother Miranda of Rose's birth. This then pushes Mother Miranda to seek the Winter's family to take the child.

Sought Out Rose By Disguising As Mia

At the start of the game, we see Chris murdering Mia before Chris. This turns out to be Mother Miranda in disguise who was planning to kidnap Rose.

Rose, being the child of a Molded being, was the perfect Vessel to host Eva. This is due to Ethan secretly being a Molded being all this time.

She's The Old Hag Ethan Encounters In The Village

Mother Miranda is also the Old Hag that Ethan frequently encounters as he goes through the village. This was revealed later on the story.

What Happened To Mia?

Kidnapped By Mother Miranda At The Start

Mia was actually kidnapped by Mother Miranda to be able to pose as her. This was her plan to kidnap Rose from the Winter's family without them knowing otherwise.

Rescued By Chris And Reunited With Rose

In the ending, Mia was rescued by Chris and is seen safe inside the Helicopter as they're about to escape. She's finally reunited with Rose, but at the cost of losing her husband.

Not Even He Knows

When asked what he is, Duke doesn't quite know what he is. Ethan asks this question to the merchant upon waking up after being "killed" by Mother Miranda.

Continues The Thread Of Mysterious Merchants

Similar to the merchant in Resident Evil 4, Duke continues the tradition of being a merchant with a mysterious air surrounding him. Why isn't he being attacked by the Lords or Lycans? No one knows. All we know is he sells wares for Ethan.

"Giving them Eva's DNA and the mold, they create the T-series experiment which resulted in Eveline." *E-Series