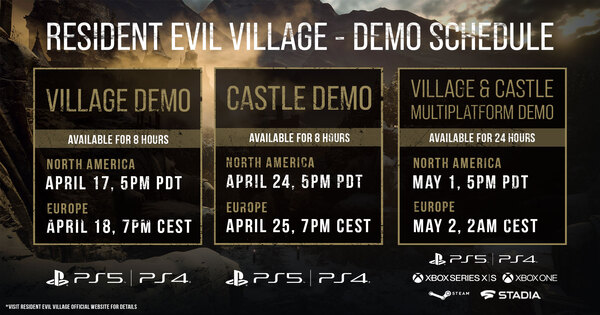 PlayStation users can have 2 separate early-access demo for The Village & The Castle regions. Then, they can participate in the final Multiplatform Demo as well, making it a total of 3 demo opportunities.

PC, Steam, XBOX ONE players will only receive 1 Demo chance starting May 1 for 24 hours. However, both regions will be open for all players to explore.

Demo Is 30 Minute Of Gameplay Only

The first 2 Village, Castle demo will only allow players to play for 30 minutes of the game. All cutscene, menu time is calculated, so skip cinematics if you want the full gameplay duration. Players can restart to play again but only for 30 minutes.

Demo Is Available For Limited Time Only

For the final Multiplatform Demo on May 1, players can play up to 60 minutes for all platforms. Players can restart to play again but only for 60 minutes. This is the final Demo before official release.