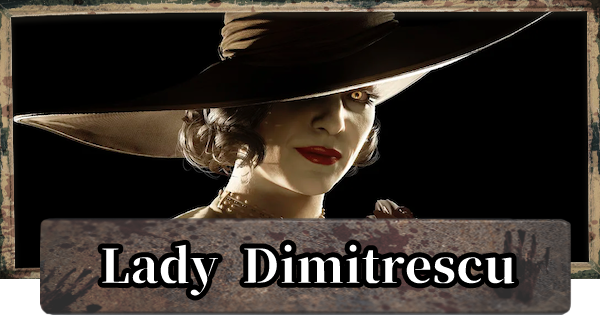 Resident Evil Village (Resident Evil 8 / RE8) guide on Lady Dimitrescu, a tall vampire woman in white dress. Learn who she is, and how she's going to be involved in the story!

Who Is Lady Dimitrescu

The tall vampire woman in a white dress who was showcased in the recent Resident Evil trailer is called Lady Dimitrescu. Although the identity of this woman still remains a mystery, we've listed up some of our findings below.

Your love for Lady Dimitrescu is loud and clear.

Here's a message from our RE Village art director Tomonori Takano, along with a very curious fact you may have wondered about: pic.twitter.com/Lj4m5pN2dJ

The Resident Evil official Twitter account posted more details about the character of Lady Dimitrescu. This note included information from the art director, who described the character as being 2.9m, or 9 feet and 6 inches tall.

In the beginning of the Resident Evil Showcase trailer, we can see that Lady Dimitrescu is making a phone call to a person she referred to as "Mother Miranda".

In the Showcase trailer Lady Dimitrescu reports to Mother Miranda that "Ethan has escaped that fool Heisenberg". She also says to Ethan that "you've escaped my little brother's idiot games". We know a little about the person called Heisenberg but perhaps Ethan has to confront her brother as well.

Lady Dimitrescu talks about her daughters when she talks to Mother Miranda. She might be talking about the 3 women in black dresses who are always besides her.

Is Lady Dimitrescu A Vampire?

Art director Tomonori Takano went on to describe Lady Dimitrescu as "vampiric" - can this perhaps be taken as a confirmation that she will actually be a vampire in-game?

Dimitrescu Is A Romanian Name

Dimitrescu is a surname from the eastern European country of Romania. We can safely assume that the story takes place there, and given the somewhat strong association of Romania with vampires, we're tempted to say this isn't a coincidence.

The Castle Is Named After Her

The castle where the player will mainly spend their time is called Dimitrescu Castle. Lady Dimitrescu (or her family) must be the owner of the castle.

Pretty sure she isn't a vampire. More than likely she will have several vampiristic quality due to some kind of bio serum. That much should be obvious. Why people are so stupid....i will never understand...

Im pretty sure "mother miranda" is not her actual mother and more like the religious kinda mother...

Dimitrescu is not a "popular" romanian name, it's a very obscure and archaic for of the name Dumitrescu, which itself is only the 77th most common name.