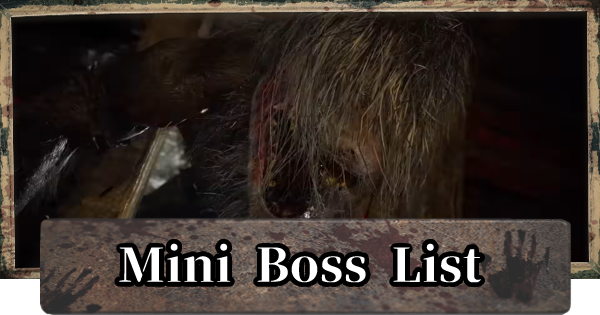 Mini Bosses are powerful semi-optional bosses in Resident Evil Village (Resident Evil 8 / RE8). Guide has all sub bosses list, how to beat, where to find, map, locations & more!!!

Appears during your first time in the village. Can be difficult to beat for the first time but is doable in New Game Plus. Acts as the boss of the Stronghold. Drops the Crystal Hammer, a treasure that can be sold for a large amount of Lei.

Check How To Beat Urias Here!

Aside from the "bearded" Urias, you can also encounter two more with the same move set but they wield a giant axe instead. These Urias are completely optional and are not part of the game's story.

They appear if you do the following:

The Varcolac Alfa is a massive werewolf boss found in the Fallow Plot area, just in front of Luiza's house. It is completely optional and can be challenged after clearing the Reservoir. Can be beaten with 5 Magnum shots to the head (Standard difficulty). Drops the very valuable Crystal Ancient Beast treasure.

Sturm is a zombie-like machine with a propeller connected to its body. This boss appears 3 times at Heisenberg's Factory. Has a weakness at its back that can be exploited. When beaten, it drops the Complex Mechanical Heart

Mini bosses are powerful & unique enemy units that while poses a threat to the player, some are not essential to defeat to progress the story. However, their high damage makes them a "boss".

Respawns In New Game Plus

If you find the mini bosses hard to beat, you can go back to beat them once you are ready again. Focus on getting better weapons first and retry in New Game Plus.

Usually Tied To A Region Or Scenario

Mini bosses are mostly tied to a certain region and are triggered when the player completes certain actions. They are often placed to spice up the experience and often will not follow the player to the new locations.

RE8 Mini Bosses - How To Beat

Normal mini-bosses not only deal more damage, but they have more HP as well. They would require powerful weapons like shotgun or bolt-action rifle to burst down effectively.

Don't Waste Too Much Ammo

A pitfall when fighting these mini bosses is that you might have to expend more ammo to beat them. This can leave you scrambling for resources in the next story encounters. Make sure to have powerful weapons like the Grenade Launcher and the Magnum before fighting them.

Remember to upgrade your weapons to deal better damage to take down mini bosses more efficiently. Focus should be damage, magazine size & reload speed to burst them down quicker.