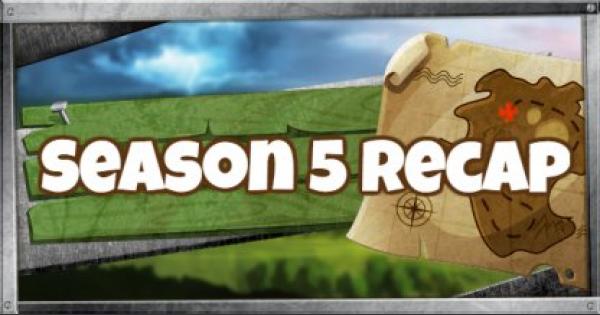 Here's a quick look at the Fortnite's Season 5! Check out the game modes, weapons, and items introduced during Season 5!!

Looking Back On Season 5

Did You Recently Get The Recap Mail From Epic Games?

The Fortnite Game Guide Team got the recap mails from Epic Games! Let's look back at what happened in Season 5.

Allowing players to redeploy gliders at certain heights negated fall damage eliminations, it also helped player mobility so they can try escaping the Storm at the last minute by building ramps and gliding away.

Winning conditions were very different from normal Battle Royale so this was a fun mode to play. The additional mechanics required players to work together more to actually complete a Getaway.

Check Out The Getaway Here

Getting kills in this game mode was tricky especially for players who aren't used to handling explosive weapons. Using the Jetpack was interesting as it added a midair vertical dimension to the game.

The constant shrink of the safe zone can make player paranoid about checking their maps. Making this mode Duos allowed players to share responsibilities of keeping track of enemies and the Storm progress.

This game mode was interesting in that players actually searched for other ways to earn points instead of simply going for the kill. Planning played a big role in player's chances of actually winning the mode.

Having all Legendary weapons pretty much evened the playing field in Solid Gold. This was where players' skills played a bigger role in getting a Victory Royale rather than the weapon they happened to be carrying.

SMGs are very easy to find with low rarity and the high DPS makes even the Common variety very useful to use.

The Double Barrel Shotgun is excellent to use at close range given the high damage it deals. Unfortunately, it's not useful at any other distance because the effectivity relies on all the pellets actually connecting.

The damage to players vs structures makes this primarily a weapon for taking down structures. Eliminating players using the Heavy Sniper is also viable, especially during mid to late game where most players have reduced Shield and HP.

This is a situational weapon as the damage is lower than that of standard Assault Rifles. The silencer is great for picking off unsuspecting enemies, but it's not a great weapon for making long range shots.

The Guided Missile stats was modified prior to reintroduction to the game. With slower movement, lowered damage, longer reload, and shorter fuse time, the strength of the Guided Missile lies in its use a scouting tool that can also deal damage.

The Rift-to-Go is a handy item to have in all game modes because of the mobility advantage it gives. The only drawback is when it's used to escape enemies as they can follow you through the Rift it creates.

This gave players a huge opportunity for mischief especially when competing to complete challenges. Throwing players off cliffs became a viable strategy to eliminate them.

The Grappler is a prime item to have for defensive and offensive mobility. Getting a target within range is easy when you can simply pull yourself toward him instead of needing to run.

Check Out The Grappler Here

This creates a massive fort and instantly gives a height advantage to players who use them. Care must be exercised however to block entrances to prevent enemies from climbing to the top.