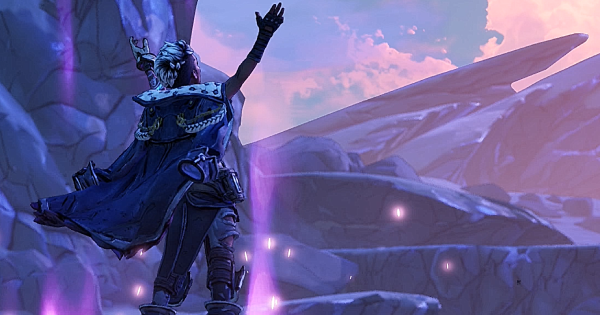 When you enter the Destroyer's Rift, you will not encounter any enemies. It'll just be a straight path to face off with Tyreen.

7. Get Legendary Weapons After Credits

After the credits, when you go to Lilith's room and Tannis opens the Eridian chest, you'll get random Legendaries. Make sure to do this part of the quest to get these useful items.

Tyreen's head is her weak spot. Shooting at this part will deal critical damage. But beware of her counterattack that summons a laser that tracks you.

Head Summons Laser That Tracks You

When you shoot at Tyreen's head, she'll summon a laser to track you. Be sure to keep mobile and avoid the path of the laser.

Move Between Crystal Lines To Avoid Them

When Tyreen steps around, she'll summon crystal lines that move outward. You can avoid them by moving in the spaces between the 3 lines.

When you see Tyreen's hands, moving sidewards in a sweep, expect fireballs to fly out into the sky. Keep mobile and avoid getting hit by dodging and moving around.

Run To Side To Dodge Giant Rock

Tyreen throw her hand up and summon a giant rock which she'll fling towards you. Make sure to run to the side of the map as the giant rock has a big hit box.

Use Varkids For 2nd Wind

Varkids will occasionally spawn in the area. Shoot them down when you're caught in a Fight For Your Life situation to gain Second Wind. This'll give you another chance to fight.

Has Several Attacks When Flying

Run Around To Avoid Fireball With Lasers

Tyreen will produce a giant fire ball that will shoot lasers around the area. Since the lasers move slow, you can avoid them by simply running around.

When she flies around, Tyreen's wings will produce lasers which you can dodge by staying in between them. She also drops rocks onto the ground that explode after a few seconds.

When Tyreen produces a cylinder with lines, be prepared to jump. They will move towards you and you need to jump over them to avoid taking damage. Be careful of her fireball attack after she summons the lines.

Open For Attack When On The Ground

Climb Up Right Foot To Get On Her Back

When you deal enough damage to Tyreen, she will fall to the ground. Climb up her right foot to get on her back - there is a good weak spot in this area that you can exploit.

When you get on her back, you'll find an eye that you can shoot. Use your most powerful weapons to deal heavy critical damage to this spot in her body.