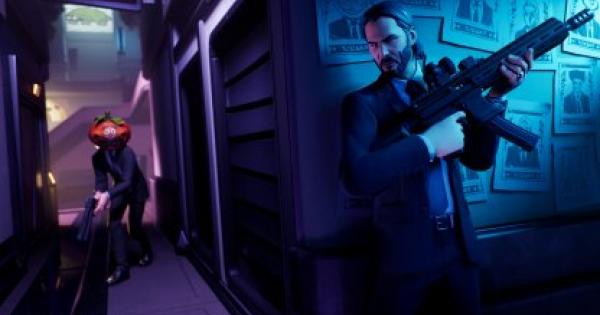 A bounty has been released and it's a free for all, pitting bounty hunters against each other to see which team will become the top agents in the island. Take gold coins from fallen agents as proof of your feats.

Wick's Bounty is a 4 player squad game mode with a different twist to the formula. Needing to collect coins and with limited respawns, players need to work together to outsmart and outplay the other team to win!

Came Back in 14 Days of Summer Event

The Wick's Bounty LTM will be one of the featured LTMs in the upcoming 14 Days of Summer event. It will only be back for a day so play before it goes away.

Check Out the 14 Days of Summer Event & Challenge Here

Released as Part of Fortnite x John Wick Tie In

The Wick's Bounty LTM was released in tune with the Fortnite x John Wick event. Challenges, new locations, and other John Wick related features were added to the game as part of the event.

The First Team to Get the 500 Bounties / Coins Wins

Whichever team collects the required amount of coins wins regardless of which team has more players left or who has more eliminations. The coins are the defining factor in this game mode.

Coins Can Be Found On Ground

Golden coins can also be acquired by picking the ones found scattered across the map. Each Coin's location will be indicated on the map, and can be tracked by other opponents too.

Players with the Most Coins are Marked

Those who have the most coins on each team will be highlighted on the map during a match. These are seen by both teams, exposing the location of their token leaders at all times.

Each Player Only has 3 Respawns

Players in Wick's Bounty only have 3 respawns each. Exhaust all of them and you will be eliminated for good from the game.

Starts Off with Weapons

At the start of the game, you will find weapons immediately in your inventory. Each player starts out with a Rare Tactical Assault Rifle and a Rare Combat Shotgun.

Fighting is Prohibited in the Continental in Neo Tilted

The Continental Hotel in Neo Tilted has strict rules and one of them is there should be no fighting within its premises. Attacks from the outside however will count so beware of windows.

Provide Back Up to Allies Being Attacked

As a team fight, it's essential to watch out for your teammates. If you see an ally being attacked, try to provide cover fire to distract the enemy or take them out before they can finish off your ally.

Don't Go Off on Your Own

Being at your own puts you at a huge risk of being ambushed by enemies. Make sure to stick to some of your teammates when going on the offensive to ensure that you don't get picked off one by one.

Keep Your Health Up After Each Fight

With limited respawns, it's best to keep your health & shields up as much as possible. Ensure that you have as much health as you can before an engagement by keeping a stock of healing and shield items at hand.

Check Out Health and Shields Here

Keep a Balance Loadout of Weapons

Range-versatile weapons are recommended here to allow you to adapt to different situations when needed. Compensate for weapon range limitations by having different weapons that work at different ranges.