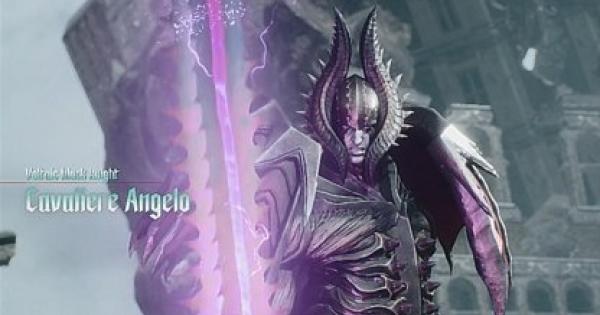 Check out this Devil May Cry 5 (DMC5) boss fight guide and walkthrough versus Cavaliere Angelo. Learn about its battle moves, gameplay and combat tips, and more!

Cavaliere Angelo will quickly swing his sword upward. Dodge to the side to evade this move.

This comes as a follow up to the swing up attack. Evade this attack by jumping.

Cavaliere Angelo will slam the ground with his sword as a final attack to his sword slash combo.

He will teleport away at times during the fight, which can lead to his other attacks.

This is his ranged attack. He will raise his arm and call down a lightning bolt to strike you from a distance.

He will charge up and quickly rush in. Avoid this attack as much as possible as this can cause significant damage on V.

Cavaliere Angelo will lunge his sword straight at you. Evade by dodging sideways.

Don't bother shooting Cavaliere Angelo when he has his wings in front of him because it completely blocks all bullet damage. You can force it down by attacking him with your melee weapons.

Clashing with his sword with your own sword attack will parry his slash. This will leave him open to attacks, so perform combos when he is stunned!

Even with her cape up, you can easily attack Cavaliere Angelo by targeting his exposed head. Jump up to be able to hit it with your melee attacks.

Cavaliere Angelo can call forth a huge dome of lightning! Jump back immediately when you see him raising his sword in the air because that's the windup to the attack.

Check Out Mission 11 After Beating The Boss!