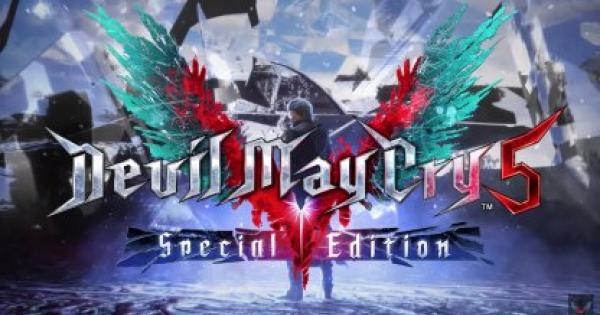 Check out this guide on the Devil May Cry 5 Special Edition, coming soon for PS5 and Xbox. Learn about the release date, price, new features, Vergil, and more about DMC 5 here!

Devil May Cry 5 will be making its way to next-gen consoles in the form of a PlayStation 5 and Xbox Series X port! This enhanced version of the game will be compatible with the PS5's DualSense, letting players have a richer, more tactile experience via the use of haptic feedback.

In addition to seeing major improvements in the form of reduced load times, as well as graphical and 3D audio upgrades, the revival of this beloved game will bring along with it new content in the form of a new playable character: Vergil!

Dante's twin brother and series antagonist Vergil will now be a playable character, thanks to the introduction of "Vergil Mode"! In addition to being usable in story mode, you'll also be able to use him in the Bloody Palace!

Sold As DLC In Current Gen

Vergil Mode was first added to the game as Downloadable Content for the current generation of consoles, including the PlayStation 4, Xbox One, and PC. With the DLC you won't have to purchase the new Special Edition to get to play as Vergil. However, note that you'll only be able to use him in Vergil Mode if you do that!

This new mode features an absurd amount of enemies that you won't see in normal mode. Perhaps this mode's difficult will even surpass the "Hell and Hell" difficulty of the original game...?

Check Out The Differences Between Difficulty Levels Here

By activatign Turbo Mode, you'll be able to accelerate the game to 1.2 times speed. This will make your gameplay even more stylish and fast-paced, making executing blinding fast combos even more satisfying!

By enabling High Frame Mode you'll be able to enjoy Devil May Cry 5 at a brilliant, high-speed 120 frames per second. You'll be able to toggle this mode on/off as you wish.

By using cutting edge Ray Tracing technology to make the reflections of light on mirrors and water even more dynamic you'll be able to play an ultra-realistic version of DMC5. This function can also be turned on/off freely from the graphic options menu, and you'll also be able to choose between prioritizing resolution (roughly 30 FPS at 4k) and prioritizing frame rate (roughly 60 FPS at 1080p).

The above mentioned "Turbo Mode", "High Frame Mode", and "Legendary Dark Knight Mode" will prioritze object display, and will therefore not work with Ray Tracing.

Also, the Ray Tracing feature for the Xbox Series X version of the game will not be available immediately after launch. It is scheduled to arrive in a post-release update.

DLC/Pre-Order Bonus To Be Included In New Version

Content which was previously sold separately as DLC, or was featured as a bonus for pre-ordering the game will be packaged into this new Special Edition of the game. This means you'll be getting the pre-order bonus Alt-Hero & Heroine Colors, the separately-purchased Deluxe Edition Upgrade, as well as the Bloody Palace free DLC along with this purchase! Check below for a list of everything that comes with the Special Edition version.

The Bloody Palace, which was added in April 2019 as a free content update for the game, will unsurprisingly also be bundled into this Special Version. The Bloody Palace is a tower tournament where you'll need to face off against waves of enemies until you reach the bottom. The lower you go, the more difficult the enemies will become.