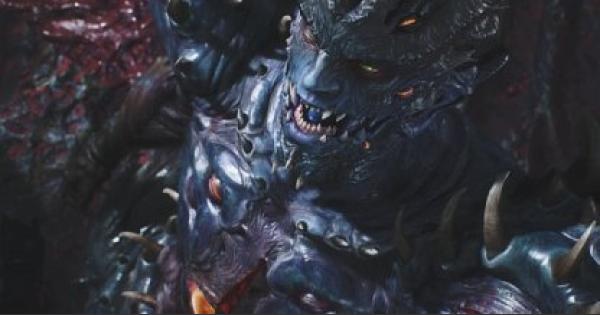 Check out this Devil May Cry 5 (DMC5) boss fight guide and walkthrough versus Urizen and all his forms. Learn about its battle moves, gameplay and combat tips, and more!

In the first fight against Urizen, you will play as Nero. Though Urizen is not meant to be defeated at this point, it is possible to beat him with Nero with the right upgrades and skills. Beating him will unlock a secret ending.

Check Out How To Unlock The Secret Ending Here

Fight Him With Devil Trigger Acquired

If you clear the game at least once on either Human or Devil Hunter mode, Nero's Devil Bringer form will be unlocked, making this encounter much easier as it heals over time, and improves damage.

Use Nero's gun Blue Rose in order to attack from a safe distance and while evading Urizen's ranged projectiles. In order to increase the damage of Blue Rose, you must learn the skills Color Up 2 & 3 and Charge Shots 1 - 3.

Use Devil Breaker Move "Break Away" To Avoid Damage

When slowed down by the blue sphere projectile, you can use Break Away (press and hold L1) to avoid damage. Time using this move before you get hit by the red projectile follow up.

Focus Fire On The Crystal

When attacking Urizen, a red crystal will shield him from damage. Shatter the crystal in order to temporarily deal damage to Urizen.

Attack Urizen After Destroying the Crystal

After the crystal shatters, particles of light will appear, and you can damage Urizen after a few seconds. Use Nero's Devil Bringer form only when the particles of light have completely disappeared, signifying that Urizen is vulnerable.

Urizen Will Be More Aggressive Later On

Urizen will change his attack pattern later on and throw in even more projectiles and laser attacks making it harder for you to attack.

Watch out for his sweeping laser attack that moves from side to side. Jump to avoid this attack. Later on, two laser beams will sweep the fight area.

These are launched rapidly twice in a row by Urizen. You can avoid this by moving sideways.

This projectile can slow down your movement and can restrict your movement, making it harder to fight Urizen. Evade this at all times since this is followed up by his red projectile attack.

Urizen launches projectiles up from the ground, causing explosions. Be sure to avoid this by moving backwards or forwards, and not sideways.

In this first against Urizen, you will play as Nero. You must learn how to use his abilities, especially his Wire Snatch ability. Attacking at close range may be risky, so be sure to attack using his gun Blue Rose.

Upgrade Color Up For Blue Rose

Since it's recommended to use ranged attack, it's best to upgrade your Color Up ability. This allows you to charge up his ranged attack for more powerful shots.

Watch out for his sweeping laser attack that moves from side to side. Jump to avoid this attack.

These are launched rapidly twice in a row by Urizen. You can avoid this by moving sideways.

This projectile can slow down your movement and can restrict your movement, making it harder to fight Urizen. Be sure to dodge and avoid getting hit.

Urizen launches projectiles up from the ground, causing explosions. Be sure to avoid this by moving backwards or forwards, and not sideways.

Check Out Mission 8 After Beating The Boss!

Attack Is Shielded By Red Crystal

After a certain amount of damage, Urizen will summon a Red Crystal that shields him from damage. Destroy the crystal in order to be able to damage Urizen again.

Use Your Sin Devil Trigger To Deal Damage

When you're hit by the homing tentacle, you will receive extra damage from his other tentacles so watch out. Avoid by moving outwards or by jumping.

Urizen will swing the tentacles and attack his immediate surroundings at close range. When his tentacles glow blue, move away from him.

Beware Of His Charged Attack

He will raise his arm and slam it to the ground, which will launch his tentacles on you. Move sideways.

Just like the first two encounters, the laser moves from side to side in a sweeping motion. Avoid the laser by jumping at the right time, and try to stay in-air by continuously doing combos.

After a dealing enough damage to him, he will start using laser attacks against you. Prepare to dodge when he shoots projectiles upwards.

Unlike the first encounter, he will no longer attack rapidly. Dodge, and prepare for the next attack immediately.

Prepare to move when the ground glows white. This can be challenging when Urizen overlaps his attacks, so keep in mind to dodge forwards and backwards as well to avoid this attack.

Check Out Mission 12 After Beating The Boss!

In the 4th fight with Urizen, you will be playing as Dante. Since Urizen will be significantly much faster and stronger, it is recommended to increase your maximum health with Blue Orbs.

Urizen's final form moves fast and warps a lot. Make sure to be always on the move unless you're attacking it. Devil Sword Dante's wide attack range is recommended for taking him down.

The Trickster Style allows Dante to move and evade quickly, and to be able to close the gap between him and Urizen for attacking.

Use Devil Trigger If In Danger

This combo leads to a kick after swinging his arm down. Avoid this by stringing your dodges and jumps.

All of Urizen's projectile attacks from his earlier forms will come into play. Red projectiles can be dodged by jumping, blue projectiles via air dash, and white can be avoided by moving around.

Urizen will summon a V formation of projectiles that will attack you after a brief pause. During this pause, you can shoot down these bullets in order to avoid less of them later.

Later on, Urizen will occasionally create two pink lasers that will rotate around the map. These lasers will damage you when it comes in contact with Dante. However, they can easily be dodged by jumping over it when it is beneath you.

This is one of the most powerful attacks of Urizen. Thorns spring up from the ground and is quick to start, so avoid by dodging sideways when Urizen starts to charge up.

Check Out Mission 17 After Beating The Boss!