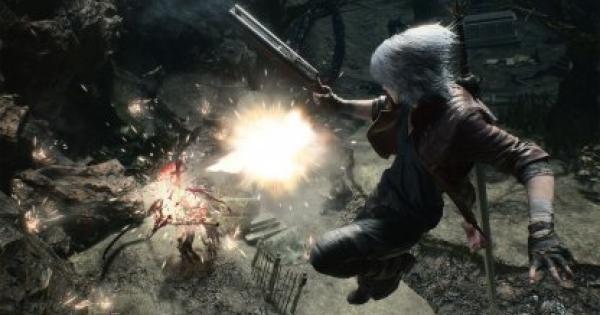 Dante Can Use Swords & Guns

Dante has in his arsenal the sword Rebellion, twin guns Ebony & Ivory, and the powerful modified shotgun Coyote-A. These are the basic weapons that he uses in his fight against demons.

Dante can also use Devil Arms such as the Balrog and Cavaliere to deal more powerful damage to foes. Using these Devil Arms increases the Stylish points you earn.

With his ability to change styles in battle, Dante is capable of changing the way his weapons move and attack in the game. This makes it easier for him to rack up Stylish points and create longer combos for higher damage.

You can shift between Dante's styles by pressing any of the 4 directional buttons on your controller. The change happens in real-time, when you press the button, so it's best to learn timing properly in order not to break your combos.

You'll earn more Stylish points and execute more powerful moves if you style change in between your combos. This can be done with the correct timing and mastery of Dante's different styles.

Beginners Can Use 1 Style While Learning

For those still getting used to Dante's styles, you can simply use just one style in combat! Style changes in between combos are not necessary to progress through the game's story.

Dante's Trickster style is very versatile and reliable, made for evasion and quick movement. It can be used as the base style when looking to start a combo as you can easily change to other styles from Trickster.

One of Dante's easier to use styles, the Swordmaster is the standard style used when wielding his Rebellion. This style is often used to start and finish a combo of attacks.

Use Balrog In Close Quarter Combat

Balrog can be used in combination with the Swordmaster style. They complement each other and can be used in a series of speedy punches or powerful kicks.

Balrog - Punches Based On Speed

Using the Balrog's quick punches allow beginners to create combos easily while dodging enemy attacks. Though the attack power is not as strong, it is a flexible, beginner-friendly method to fight.

For more advanced players, the Balrog's powerful kicks have high attack stats but low move count. It's recommended to use this combo when enemies are low in health and should be finished in just a couple of hits.

The Gunslinger style is best used with Dante's Ebony & Ivory and Coyote-A. It's good to alternate between Swordmaster and Gunslinger as these style can be used in combat while in mid-air! They're also effective in medium range combat.

The Royal Guard style is best used to guard against enemy attacks. If timed properly, Dante won't suffer any damage and will fill up the Royal Guard gauge, allowing him to counter his enemy's moves.

Dante will fill up his Devil Trigger gauge gradually in battle. When it is full, he can activate his Devil Trigger and change into his demon form. His entire vitality bar will refill and will receive an attack boost, making it possible to turn the tides of the battle to his favor.

Can only be used if you've charged the SDT gauge by transferring accumulated DT gauge. Instead of recovering health, this form significantly increases Dante's power and is recommended if you want to quickly take out enemies and bosses.