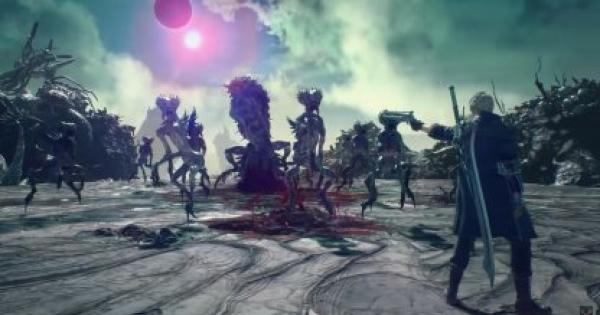 Check out the secret mission list found in Devil May Cry 5 (DMC5)! Find out the list of secret missions, their locations, which mission you encounter them, the requirements & rewards for each, & more.

You will find this Secret Mission in the Hotel. It will be in a room after using the Nidhogg Hatchling.

Easy to accomplish this mission since you are given more than enough time to defeat all enemies. Keep those combos coming to defeat all the enemies within the time limit.

Head Down The Fire Exit

Instead of going upstairs, head down the Fire Exit to find the second Secret Mission.

Go To The Tunnel With The Gate

Once you are at the bottom of the Fire Exit stairway, head to the tunnel with a gated entrance. Turn around to find the Secret Mission waiting for you to complete.

In order for you to find this Secret Mission, you will need 2 Nidhogg Hatchlings. The first can be found while progressing the Mission. The second Hatchling needs to be found by following the steps below.

Destroy The Building Wall With Nightmare

A wall in the square can be destroyed when you summon Nightmare in the middle of the mission. There are some Blue Orb Fragments behind these walls so do not forget to collect these.

▲You can get another Nidhogg Hatchling while exploring the building

Head To The Dead End Before The Mission's Boss

There will be a blocked off path at the dead end right before the mission's boss. Use the second Nidhogg Hatchling to open up the path. It will lead you to a room where you can view the Secret Mission.

Shipment Containers Are Your Landmark

The area with lots of Shipment Containers will be what you should look out for. It is checkpointed when you are playing the mission. Immediately head up the yellow stairs. At the top, you will find Secret Mission 4.

Summon Nightmare To Destroy the Wall

Summon Nightmare at the wall near the container area where you were forced to fight with some enemies. Another fight will occur after pushing forward through this new path.

After The Battle, Head Up The Yellow Stairs

After the forced battle, climb up the stairs near the Red Orb stalagmite, and at the top, you will find the Secret Mission.

Found In The Area Near The 2nd Lava Elevator

The Secret Mission can be found in the area with the second lava elevator.

Move To The Platform On Your Right

When on the elevator, jump onto the platform to your right. If done correctly, there will be targets which you can use your grapple to pull yourself towards.

Climb Up Using Your Devil Breaker

Lock onto the target, and use your Devil Breaker to move you towards the target. Lock on to the next one, and pull yourself there, and so on. You will eventually get to a platform with the Secret Mission.

Destroy The Dead End With Nightmare

Going down the street at the start of the mission will lead you to a dead end. You can destroy the wall by summoning a nightmare to open up a path. Gold Orbs can also be found here.

Make A Left After The Battle

While heading down this new path, a forced battle will occur. After the fight, immediately make a left to head to the path with the Secret Mission.

Destroy The Roots By Summoning Nightmare

At a glance, it seems as if this area is not passable. However, summoning a Nightmare will open up the path, and even give you Blue Orb Fragments to collect.

After unblocking the path, head for the wall at the far end of the area. Climbing to the platform in the middle will show you the secret mission.

There Is A Path In The Middle Boss Fight

During the boss fight in the middle of the mission, there will be a path leading to Secret Mission 7.

Enter Using Either Side Of The Room

A red pulsating doorway will be located on either side of the room. Choosing to enter either is fine.

Once you enter this area, follow the path uphill until you reach a room with the Secret Mission light.

Head For The Western-Style Building At The Start

After starting Mission 11, immediately head to the Western themed building with checkered floors. This will be the area where you will find the Secret Mission.

Destroy The Clot To Open A New Path

Once you are at this building, destroy the blood clot found at the hole of the building. It will trigger a cutscene that unblocks a new path for you. Once unblocked, head upward.

Head Back To The Room Above

After destroying the clot, head back to the room where you jumped down from. You may need a double jump ability to access it. When you get to the room, the Secret Mission will be there waiting for you.

Go Underground After Unblocking The Path

Secret Mission 9 can be found in the latter half of Mission 12. You need to unblock paths to get to destroy 3 blobs of blood to open the underground path.

Secret Mission Is Across The Entry Point

The Secret Mission light is found on the opposite side of your point of entrance to the underground path.

Use The Trickster Ability To Get Across

You will need to use a double jump, and the trickster ability to get across the gap along the path.

Secret Mission 10 can be found in Mission 14. It will be accessible during the point in the mission after you've defeated the three copies of Cavaliere Angelo, Artemis, and Goliath.

Destroy The Blood Clot At The Dead End

After defeating the three bosses, head toward the dead end at the end of the hallway with the yellow light. There should be a blood clot found there. Destroy it to trigger a cutscene.

After destroying the blood clot, move forward along the path that the Blood Clot was blocking. The Secret Mission will be waiting there for you.

Make A Right Before The Divinity Statue

Just before the first statue in this mission, there is a path to its right. Follow the path to get to the Secret Mission.

You Will Need A Devil Breaker To Access Secret Mission

You will need a Devil Breaker which allows you to move through the air. A Gerbera or Punch Line will be very useful to get to the Secret Mission area.

Climb The Wall With A Devil Breaker

After crossing the wall, use the Devil Breakers to climb up the cliff and access the Secret Mission area. It would be best to use the Punch Line so you can easily ride upwards the cliff.

▲The secret mission opening area is around this area. If you climbed the cliff correctly, this is what you should see

The area after the forced battle with the Hellbats, and Behemoth in the middle of the mission will be the Secret Mission area. Be careful as this area is full of crumbling patterns.

Descend After The Forced Battle

After the forced battle, an area will open up with platforms that crumble after stepping on them. Descend the area using the ramps that spiral downwards in the area.

Another Forced Battle Will Occur

You know you are heading towards the right path if you find yourself in a forced battle against some Chaos, and Furies.

Head For The Red Orb Tree

After the second forced battle, head for the Red Orb Tree on a crumbling platform, and enter the pathway behind it.

What Are Secret Missions?

Secret Missions are optional Missions that you can do while playing the main story of Devil May Cry 5. These missions usually test out your skills on the different playable characters.

Check Out The Playable Characters Here

Secret Missions are usually hidden away in unnoticeable areas of the map. Each story mission can have one or more Secret Missions hidden within them so keep your eyes peeled!

Secret Missions have special requirements that you need to meet in order for you to complete them. These prerequisites include killing enemies under a time limit, only certain weapons dealing damage, and more!

You Can Replay Secret Missions