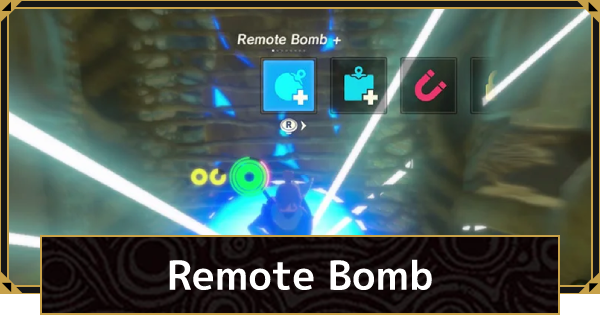 Remote Bomb is a Rune ability in Zelda Breath of the Wild (BotW). Learn how to use Remote Bomb, its effects, the differences between round and square types, and how to upgrade it.

Remote Bomb Effects And Use

If you want to keep the bomb in place, use a square Remote Bomb that is hard to roll. On the other hand, if you want to use it by rolling it on a slope, use the round one.

Can Be Used In The Air

Remote Bombs can be used even when using Paraglider, for example. You can also attack the enemy by dropping a Remote Bomb right above them.

Remote Bomb can be detonated even underwater. It is useful for attacking underwater enemies and catching fish. But it cannot be activated/detonated when Link is underwater.

It Can Be Used To Avoid Battles

You can also place Remote Bombs while running by pressing the Jump→L button, allowing you to blow up enemies while escaping. You need to be careful not to get yourself caught in the blast, but it'd be easier to escape.

Attack From The Cliff Without Being Noticed

If you drop a Remote Bomb from a cliff, you can attack without being noticed by the enemy. It takes longer due to the smaller damage, but if the enemy does not have a long-range attack, a one-sided attack is possible.

This combo takes advantage of the Remote Bomb's wind. If you jump and place a Remote Bomb after fanned a spot with the Korok Leaf, it will roll forward at high speed.

How To Upgrade Remote Bomb+

It can be upgraded by giving Purah the Ancient Shafts in the Side Quest "Slated for Upgrades". There are also other Runes that can be upgraded, so if you have the materials, you should definitely upgrade them.

Other Runes That Can Be Upgraded