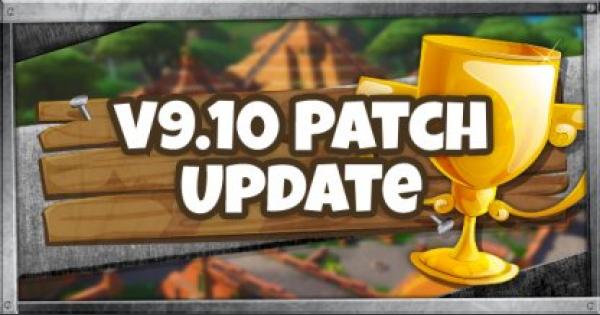 Score some wins in the v9.10 update with the new Fortnite x Michael Jordan collaboration! This update also included the release of Hot Spots and Carriers, a new gameplay mechanic.

Get ready to drop in

Update 9.10 releases tomorrow, May 22. Downtime begins at 4 AM ET(0800UTC). There will be extended downtime for this release.

Nothing but Net in the Fortnite x Michael Jordan Collaboration

The 3rd collaboration of Season 9 brings together Basketball and Battle Royale in an unexpected combination. It features an exclusive skin bundle and a Creative LTM.

Get the Hang Time Bundle to get the exclusive Grind Outfit and Clutch Outfit, who are both sporting Michael Jordan's iconic rubber shoes. The Bundle also comes with its own set of challenges!

The first Creative Mode LTM, the New York-inspired Downtown Drop will have players going through the streets and collecting coins to win!

Get the Best Loot in Hot Spots

Hot Spots are a new game feature that highlight a named location each match where Loot Carriers will spawn. Loot Carriers carry high-tier loot so shoot them down to get your hands on them.

Hot Spots are Highlighted with a Gold Text

Named locations chosen to be the Hot Spot for the game will have their name appear in gold during the match. You can check out for Hot Spots easily through your Map.

Each Hot Spot will Have Multiple Carriers

There will be between 12 to 16 carriers going around Hot Spots for players to shoot down. The amount of Carriers depends on the size of the named location.

The Semi-Auto Sniper Rifle has finally come out of the vault with the release of the new update. This was done to provide another medium/long-range weapon in the game.

Check Out the Semi-Auto Sniper Rifle

Check Out the Shadow Bomb Here

SEMI AUTO IS SO TOXIC