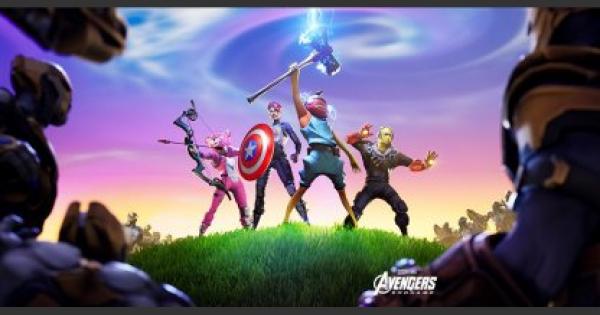 The Fortnite X Avengers Endgame is here! Learn everything about the anticipated superhero the new Limited Time Mode - Endgame, including its release, available weapons, tips to win, and more!!

In this LTM, players are split into two teams - team Thanos & the Hero team. With different objectives, players have to work together to either gather the six Infinity Stones or defeat Thanos & his Chitauri army!

Fight as Team Thanos or Team Heroes In LTM

In this LTM, players will each be designated to either Team Thanos or Team Heroes and will keep respawning until the opposing team completes their objectives. For the hero team, this is to defeat Thanos & the Chitauri army, while team Thanos has to find all six Infinity Stones and annihilate the heroes.

Complete Endgame challenges and unlock some exclusive rewards! These challenges can only be done in the Endgame Limited Time Mode. You will need to play both sides of Thanos & Hero team to complete these challenges!

The challenge is available till May 6, complete them all by then!

Glide down in heroic fashion with the Avengers Quinjet Glider! This exclusive Glider can be unlocked by completing any 10 of the Endgame Challenges.

Upon starting, the Hero Team will have a map that will lead them to a Mythic Avengers item. This can either be a Captain America's Shield, Iron Man's Repulsors, Thor's Stormbreaker, or Hawkeye's Bow.

Other Avengers Items Can Be Looted From Chests

Players can cycle through different Avengers items by looting them from chests found throughout the Fortnite map.

For team Thanos, all players will spawn as a Chitauri soldier, each equipped with a powerful laser rifle, a special grenade attack useful against buildings, & a jetpack for minimal flight time.

Thanos' Chitauri team has a limited 100 respawn per match. Keep your eyes on the respawn counter to keep your team up for endgame!

Infinity Stone will Appear One by One

The Infinity Stones will appear on the map one by one as the game progresses, and their arrival will be announced via player's HUD. These Stones' location can be confirmed from afar with the beam of light emitting to the sky.

When Thanos is eliminated, another Chitauri in the team will transform into Thanos after a short cooldown, unless Thanos is the last player standing on their team.

Getting to the first Infinity Stone ensures that one player will become Thanos and will provide a huge advantage in this LTM. This also provides powerful benefits for Thanos & a health boost to each Chitauri in the team.

Use Thanos's Unique Abilities to Plow Through the Heroes

Use Melee Attack Punches In Close-Range

Your powerful punch can deal 80 damage per hit, a perfect close-encounter attack that can eliminate opponents in just a couple of hits.

Use Beam In Mid To Long Range

The Beam is an effective way to deal damage to enemies that are further away from you. It is also an attack that can be used while in the air and will consistently .

You can rush towards the ground with the Jump Punch attack. This generates a shockwave that will hit your enemies with up to 80 damage. Plus they'll be knocked away!

When your HP and shield is low, you can use the Charged Jump to quickly escape enemy shots. You can use your Beam to damage foes while in the air or knock them away with the Jump Punch move.

Heroes will Start Pre-Equipped With Weapons

As the match starts, you will have 2 ranged weapons at your disposal. Use these items to keep yourself alive while searching for your Avengers gear.

Pick Up Avengers Items As Soon As Possible

Having an Avengers weapon in your inventory will let you do unspeakable damage to your opponents. Plus, these will have special effects and abilities that'll make it easier to defeat the Chitauri army.

Use Pickaxe to Dig Up Avenger's Weapon

Your Avenger's gear will be hidden under a pile of dirt located at the point where your map points to. Find its location using your map and look for beacons of light, use your pickaxe to dig the item out to acquire your awesome gear.

Each of the Avenger weapons have their distinct characteristics and uses. Make sure to adjust your playstyle based on the Avenger Weapon that you collect in order to make the most out of these powerful tools!

Avenger's Weapon Will Be Kept Through Respawn

Even after being killed, you will still keep your Avenger's weapon in your arsenal to fend off the invaders.

The Cap's trusty signature weapon. When thrown, it will ricochet and damage multiple enemies before it returns to you! You can also use the shield to block incoming fire while moving to keep you safe!

A masterpiece of engineering, Iron Man's Repulsors give you a ton of options in combat situations. Hover in the air and rain down your blasts on enemies as it auto-locks on any hostile target!

A weapon forged specifically to deal with the Mad Titan. The Stormbreaker is a close combat weapon that deals tons of damage! You can swing it like a normal axe, throw it like a boomerang, and even deal AoE damage by jumping towards a target!

A versatile weapon fit for several different situations. You can use the bow to grapple onto surfaces to move around quickly. It also fires an arrow that deals explosive damage to enemies it comes in contact with!

When your team has located an Infinity Stone, it's best to guard it and prevent the enemy team from collecting it. This will stop their Thanos from getting powerful buffs & help your team hold out until the match is over.

Focus Fire on Thanos When Engaging

Thanos, being a super villain, is extremely hard to take down even with the help of Avenger's arsenal. Focus fire with your allies when taking down this foe, and try to keep distance between you and Thanos as much as possible to avoid being mauled down.

Released in Time for Avengers: Endgame

The Fortnite x Avengers event comes in the heels of the Avengers: Endgame worldwide premier! The event could showcase new features based on the film.

On May 2018, Fortnite released a new game mode wherein players could find the Infinity Gauntlet in the map. Those who wield it will transform into Thanos and unlock the powers of the Gauntlet!

What is Avengers: Endgame?

Avengers: Endgame is the 4th movie to be released for Marvel's Avengers line and is the conclusion and direct sequel to last year's Avengers Infinity Wars.

"Whatever it Takes" - Brief Movie Summary

After the events of Avengers Infinity Wars, heroes left after Thanos' snap will need to work together to reverse the outcome of the final battle. Iron Man, Captain America and the rest of the Avengers are prepared to do whatever it takes to save their allies.