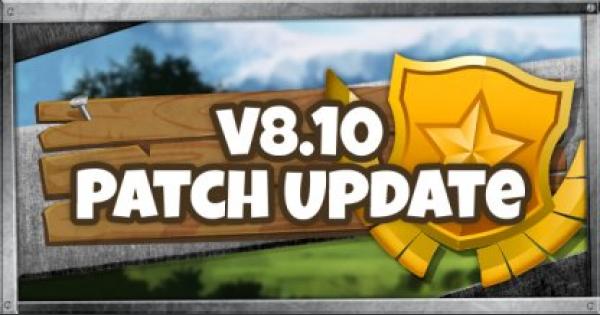 Learn everything new in Fortnite's v8.10 Patch Update, including its release date, downtime, and the launch of the the new vehicle - the Baller!

Check Out the Latest News and Updates

Introducing the Newest Vehicle in Fortnite

Mobility just became more fun as v8.10 brings with it a new vehicle that will have players rolling their way all over the island!

Fortnite Season 8 will have you rolling over the competition with the latest vehicle in the game - the Baller! Equipped with a grappler that can fling you to far-off locations, the Baller is an exciting way to travel across the Battle Royale island!

The Baller will spawn near Expedition Outposts and Pirate Camps. It's the latest vehicle in Fortnite and can only fit one passenger!

With the new v8.10 update, the vending machine function has been updated. Instead of taking resources as payment, they will instead drop one free item or weapon before disappearing from the map.

Pull Off Heists with Friends in Getaway LTM

For the first time since its initial release, the Getaway LTM will be back for an unspecific amount of time. The unique LTM will have players working in a squad to steal Llama jewels before the other teams!

With the new rarity tiers for the Heavy Assault Rifle, the weapon's base damage has been adjusted to Common/Uncommon/Rare 36/38/40.

Clingers can now only stack up to 6 instead of 10, reducing the maximum amount of Clingers you can carry in-game.

The Infinite Dab emote duration has been increased from 12 hours to 13, making it longer for an hour for dab fans.

Custom animations have been added to the actions listed below.

Check Out the Creative Mode Here

New game rule options will give creators a lot more freedom in customizing team settings and their choice of PvP games.