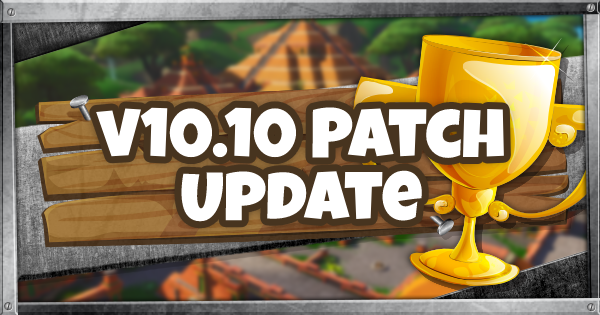 Find out everything to know about the 10.10 Patch Notes of patch update & content update here! This includes details of v10.10 new weapons, items, changes, & more!!

Epic Game announced the BRUTE Balance Adjuestments on Aug 23, 2019. It is less effective and seen in the game. Get to know how it is now and make a strategy for battle royale.

We are surprised that Epic Games made changes to BRUTE before next major update 10.20 planned during the week of Aug 28.

There's close to no news about what's included in the v10.10 Content Update for now. We can only speculate that maybe another Rift Zone will open or a new weapon might be added.

Summon objects from the sky to flatten your enemies with the new Junk Rift throwable weapon. Just stay clear or you might find yourself being flattened instead.

Something went terrible wrong in the Recreation Site's Rift Beacon causing an explosion that completely wrecked the site. It also created a new form of consumables that can only be found within the area.

The explosion at the Recreational Center has created Glitched Consumables. Since they're glitched, they spawn completely random but they have the same effects as their regular counterparts.

The Horde has returned to the island, but it's been contained to the newly returned Retail Row! Updates to the BRUTE vehicle were also added to this update.

The Week 1 and Week 2 Secret Battle Stars can now be collected! So long as you were able to unlock their respective Loading Screens, you'll be able to access them in a match.

Check Out the BRUTE Vehicle Here

A Targeting Laser will now show up whenever players load and fire missiles. This will be visible to both enemies and teammates alike as a means of a visual cue to where the missiles are being aimed.

Retail Row Returns with the Horde

The Rift Beacon has brought back Mega Mall to its humble origins, but it's not all the way it used to be. Retail Row has been overrun by the Horde and they're ready to rip apart all those who enter the area!

The same as in their previous appearances, the Fiends and their Spawn Crystals will all drop loot when destroyed. The tougher the fiend, the better items it will give out!

Horde is Contained within Retail Row

You don't have to worry about meeting Fiends around the island as they'll only show up within Retail Row. Upon exiting Retail Row, they'll stop their pursuit.