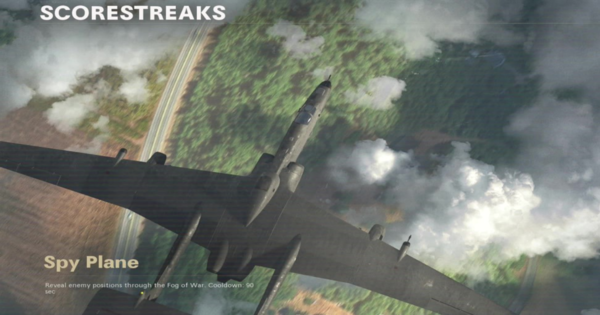 Read this guide to learn about Spy Plane Scorestreak in Call of Duty Black Ops Cold War (COD Cold War)! Find out how and when to use this Scorestreak (Killstreak) & gameplay tips.

The Spy Plane is a recon plane that gives players and their team an outline of the enemy's position. If used correctly, it gives players the upper hand by pinpointing enemy locations on their mini-map allowing for flanking or counter-ambushes

When activated, the Spy Plane will regularly pulse the map, revealing the enemy's positions for you and your team as red dots. Pulses happen at set intervals and the Spy Plane will leave & stop operating after around 2~3 minutes have passed.

Your Spy Plane reveals the enemy team's last known location when it pulses the map. This is why the markers on the minimap are static. Be careful when approaching the area as the enemy may have moved away.

Can Be Countered Or Destroyed

The Spy Plane can easily be countered by other Killstreaks such as the Counter Spy Plane or Air Patrol. It can also be destroyed by enemies that use anti-air weapons. 1 shot of the Cigma 2 Launcher will scrap one.

Use After Teammate's Spy Plane Expires

It is recommended to use Spy Plane if your team does not have an active one on the air. However if your team already has an active Spy Plane, wait for it to expire or get destroyed before deploying your own. Unless, the enemy has high volume of anti-air fire and you want to saturate the battlefield for max coverage.

What Are Scorestreaks (Killstreaks)?

Getting a number of kills and earning scores rewards your efforts by allowing you to use Scorestreaks. These are special abilities that you can "call" to aid you and your team on the battlefield. Some of them require direct control while some just need to be activated for them to take effect.

Progress to get a Scorestreak do not disappear when you get killed. Unlike Killstreaks in previous COD titles that require you to chain multiple kills, holding objectives and other actions rewards you by filling your Scorestreak meter. Work with your team and do objectives in order to get to higher Scorestreaks!

Chaining kills and doing objectives in a short period of time rewards you with a score multiplier. Score multipliers significantly increase the scores that you gain, giving you a better chance of getting those high-score Scorestreaks!

Unused Scorestreak Are Retained Even If The Player Dies

An unused Scorestreak will be retained even if the player is killed. It will be immediately available for use once you respawn. Save scorestreaks for the right timing to maximize their effects and turn the tides of battle!