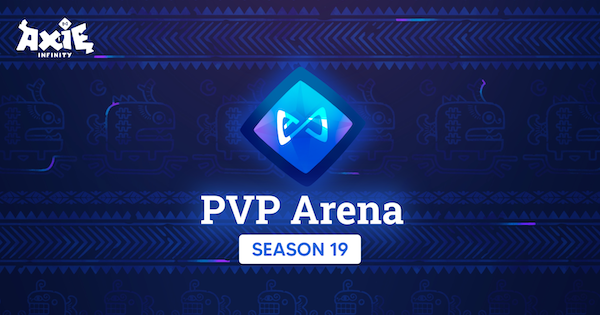 Axie Infinity just released their season 19 update along with some card balance update and formula update for both skill and morale.

Recently, the developers found out that there are some players who used a cheat that allows them to see what are the cards their opponent played after ending their turn. This gave a huge advantage to the cheaters and has violated the integrity of the game. Because of this, they have decided to extend the season by two more weeks to give the players more time to achieve their correct rank. Season 19 will now officially end on January 4th, 2022 instead of December 21st, 2021.

Looking back at the last 3 seasons, each has been held for one month, followed by several weeks of Off-Season before the next one begins. It is still unclear how long will this Off-Season will be, but based on the patterns from the previous seasons, the season 20 will be on the first week of February to Mid-March.

During the duration of the Off-Season, players will won't be competing for the AXS reward for the top 1000 players. During this time, players will be able to relax and try out new axies and builds since there wont be a reward for top performing players.

Last Off-Season, they specifically announced that the players will have a separate MMR for Off-Season and the normal Season. However, it was recently posted on Axie Infinity's official discord server that all players will be reset back to 1200 MMR in each Off-Season.

It was also noted that they intended to give zero rewards during Off-Seasons, but they ended up deciding to keep the SLP that can be earned from each win to give players a reason to complete.

Similar to previous seasons, everyone who will be ranked high enough on the leaderboard will win some AXS by the end of this season. Since the MMR has been reset to 1200, everyone has a fair chance to get this reward by competing in the Arena.

On previous seasons, critical strikes were too powerful and random, this would often affect the out come of the games you play.

Since all Axies has a chance to perform a critical strike even with low Morale. They made the change wherein the damage of critical strikes will now depend on your Axie's Morale.

The formula for calculating the total damage of your combo with skill has been changed. Before, players always tends to choose Speed and HP over the Skill stat because it only has a small impact when it comes to playing combos.

This change will make the Skill stat more desirable in some builds rather than always going for more Speed.

When a new season begins, everyone starts at 1200 MMR to give a fair chance to old & new players in climbing the leaderboard.

This is **** how the hell can a player see what card I play? The server should only reveal the cards after the picking stage! This is just an excuse so that they wouldn't need to reset MMR for the players.

They should have reset the players below 800 MMR with the extension. those who play fair are really negatively impacted by this. :((

Fk. I was waiting for the season to end so that my mmr could be reset can I can farm some slp. F stupid idea to extend

too much damage on a beast card...even if u had a 200hp def...need change..for a fair play

same as aqua, and reptile whos already buffed af got buffed even more