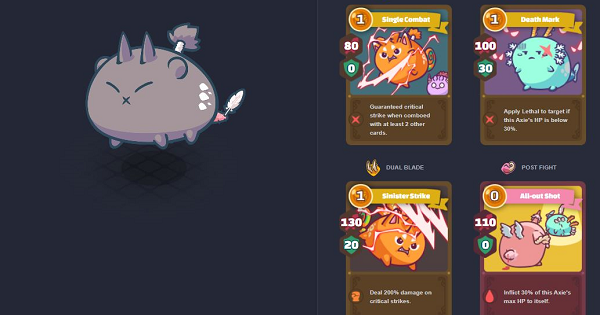 To be able to maximize this build's potential, we need to consider the best stats possible for this build. This build aims to apply lethal using Death Mark and deal massive damage with Sinister Strike.

The main goal of this build is to use All-out Shot to lower your health and then use Death Mark to apply the Lethal debuff. This will guarantee critical strikes with your Sinister Strike.

With Axie Kiss Mech build, the parts that are necessary to have are Axie Kiss and Dual Blades. These parts will be your main source of damage when bursting down enemy Axies.

Post Fight is going to be your enable for the effect of Death Mark. You can use this to reduce your total HP.

You can use the Hare Dagger to draw additional cards since mech has a higher speed stat than most of the Axies in the game.

This combo can instantly burst down enemy Axies because of the guaranteed critical strike from the lethal debuff of Death Mark.

It is best that you pick Axies with high HP stats to draw out the fight. Plant and Reptile Axies are your best choice for this build. This will allow you to get more rounds and card draws which can help you burst down enemies with a single combo.

Aquatic, Bird, and Dusk axies can deal 15% more damage to Axie Kiss Mech Build since its a Mech Axie.