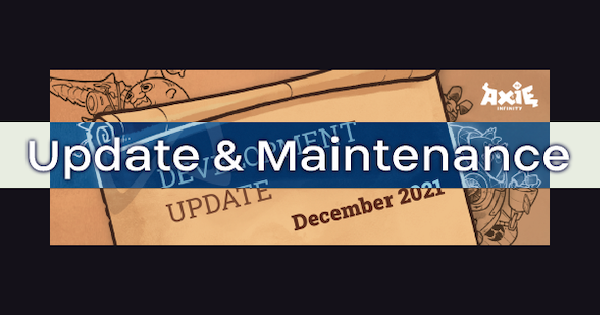 Check out the latest Update & Maintenance news for Axie Infinity. Find out all updates about Axie Infinity, including the latest news, game changes, server status, patch, and more.

The main changes that will be made are as follows:

The purpose of restricting SLP after gifting is to prevent violations of our TOS.

Upon the start of season 19, there has been multiple ban waves to remove abusers and violators guarantee fair play among Axie Infinity Players.

Axie Infinity just released their season 19 update along with some card balance update and formula update for both the skill and morale stats.

Axie Infinity No. 1 Among NFT Volume

In a recent news post, the developers of Axie Infinity, the most popular NFT game in the crypto ecosystem, were pleased to reveal that the fighting monsters were the most traded NFT collection of all time and thanked the players for this achievement.

Last Ocober 13, 2021, the Axie Infinity Team stated on their official Twitter account that they are aware of some in game issues with energy, SLP, and MMR displays after a match.

Because of these isues, they entered maintenance for these problems to be resolved. Last Friday, the game devs relased the Version 1.1.0a Patch for Axie Infinity

On October 15, 2021, Axie Infinity has released Patch 1.1.0a Update. The new version of the game aims to improve its performance and the return of being able to challenge your friends in a duel.

Axie Infinity has seen a surge in new players recently. Axie Infinity servers may sometimes experience overload or even downtimes. The devs may also perform server maintenances to add improvements to the game or upgrade its servers to be able to handle a player base that’s growing every day.

The status of Axie's servers change from time to time. You can check these pages and social media accounts to get the latest updates from the community or from the game devs themselves:

Axie Infinity is still a relatively new game. The game is still in its Alpha stages. The game developers at Sky Mavis are doing their best to keep improving their server’s capacity to be able to handle the spike of new players.

Recently, they have shifted their engineering team to fixing the server issues. They have also added additional people to work on scaling up their servers and even hired community members to lead their support system.