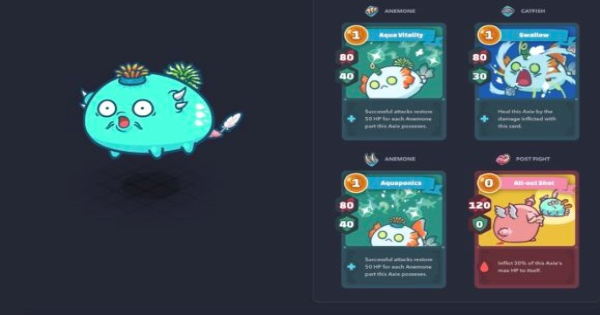 To be be able to maximize Double Anemone's potential, we need to consider the best stats possible for this build. Double Anemone focus on abusing its healing abilities which will make it hard and longer to kill. Double Anemone Build favors Speed as its strongest attribute.

Double Anemone Build revolves around abusing its healing abilities which makes it very hard to kill, as long as it doesn’t die in 1 turn. The key to this build is its Anemone cards which restore 50 HP for each Anemone card the Axie possesses.

A great card that goes well with this build is Swallow which gives another heal based on the damage inflicted with the card.

This zero-Energy card deals a whopping 120 damage at the cost of 30% max HP. But, with this build’s unlimited heal abilities, it can quickly recover the lost HP making this card free to cast.

These moves can be a great addition to Double Anemone especially with the high attack damage and buff abilities it brings.

This Combo can deal great damage and at the same time heal you if your Double Anemone Axie is injured. The damage bonus of Angry Lam will be compensated by the heals of the Anemone cards.

All-out Shot deals 120 damage at the cost of 30% max HP. With this build’s Anemone cards, All-out Shot will be used with no drawbacks and its damage will be benefited from immensely.

This build works well with a burst damage aqua Axie and 1 bird Axie. The bird is used as a consistent card drawer to get the anemones the heals and damage they need to chew through the enemy team.

The weakness of this build is anti-heal debuffs and 1-round kill combos.