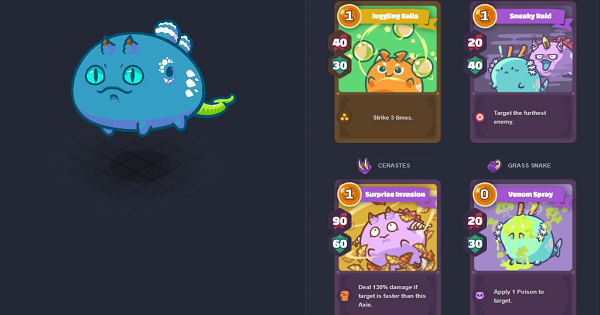 To be be able to maximize Backdoor Poison's potential, we need to consider the best stats possible for this build. Backdoor Poison build favors damage over time and HP as its strongest attribute.

Backdoor Poison build relies on the tank's poision abilities as it aims to drain the enemy team's life continuosly. What's good about poison damage is it ignores the armor of your enemy. It can directly damage the enemy's health.

Backdoor Poison are usually axies with high base health such as Plant, Reptile, and Dusk.

With Poison Tank, the parts that are necessary for an axie to have are Yam and Pumpkin . Yam and Grass Snake activates the abilities; Gas Unleash & Grass Snake. Without these parts, Poison Tank will not work.

Multiple hit cards will trigger the poison set up multiple times. This will allow you to utilize your poison debuffs more efficiently.

Disguise and Vegetal Bite can be paired with Backdoor Poison . These moves if turned into a combo will allow you to gain and steal energy. With the energy gained, you will have no problem abusing Gas Unleash + October Treat continuously.

Gas Unleash can build up a couple of Poison stacks on your enemies if you time it right. High armor skills like October Treat combined with at least decent HP will help your axie survive big damage.

Pair these 2 together and you'll eventually knock out your opponent over time by the poison damage, while your axie still remains alive by the armor October Treat gives.

Backdoor Poison build is best paired with axies who have defensive and support abilities. 2 reptile axies with these kinds of abilities can work well with Backdoor Poison.

Backdoor Poison is primarily weak against damage dealer axies. Damage Dealer axies can potentially one-shot combo this build if no armor is set up. Beast, Bug, & Mech axies can deal 15% more damage to Backdoor Poison since its usually a dusk axie.