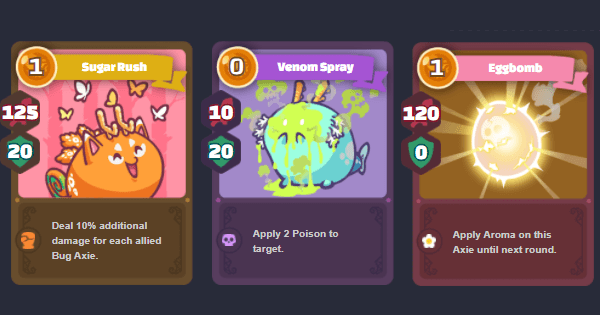 You can see the turn order for each round at the top of your screen during combat. This turn order will depend on the speed stats of all of the Axies present.

There are multiple factors that can affect the overall damage calculation of your attacks. Consider the following to compute your total damage output.

How To Increase Damage

Use Class Cards For Additional Damage

If an Axie uses a card from its class, this will also slightly add an additional 10% bonus damage.

There are a total of 9 Axie types in the game with strengths and weaknesses. this will affect the overall calculation of each card when attacking. The damage of the card that you use will depend on the card's class and the target Axie's class.

There are some cards that can provide additional damage if their requirements are met.

Using multiple cards or comboing with an axie will slightly increase your overall damage upon attacking depending on your Skill Stats. To compute for this damage bonus, you must follow the following formula.

Buffs and Debuffs also plays a role on your overall damage when playing cards. An Attack+ buff will increase the damage of your first attack by 20%. However, if you have an Attack- debuff, it will decrease your next attack by 20%.