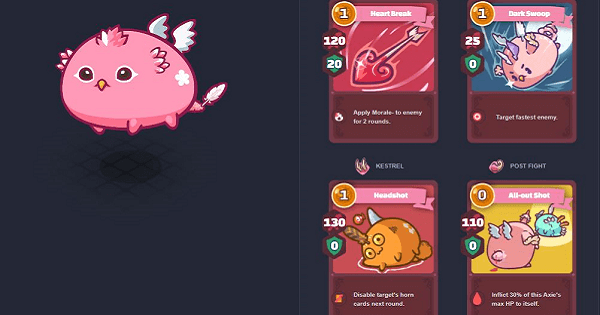 To be be able to maximize Backdoor Bird's potential, we need to consider the best stats possible for this build. This build aims to eliminate the enemy's main damage deal dealer (back-liner) immediately. Backdoor Bird favors speed as its strongest attribute.

The main task of Backdoor Bird is to remove potential threats in the enemy back-line. The damage dealer axies are usually the fastest. With the ability "Dark Swoop", this build will be able to give attack priority to the fastest enemy axie.

Backdoor Bird is very similar to Pure DD in terms of their kit. Both builds work well with high attack damage abilities and usually relies on their speed to set up their combos.

With Backdoor Bird, the parts that are necessary for an axie to have are Little Owl & Eggshell. Little Owl and Eggshell activate the abilities; Dark Swoop and Eggbomb. Without these parts, Backdoor Bird will not be utilized.

Peace Treaty is a viable high attack damage abilities for the Bird class. It will force you to remove your Dark Swoop but you can deal tons of damage and apply an attack- debuff.

Because of your high speed, early bird will almost always deal additional damage since it is the fastest class among all Axie types. This will allow you to burst down enemy backline without a problem when played correctly.

Dark Swoop & Early Bird can be paired with Backdoor Bird . Dark Swoop allows you to target the enemy's fastest enemy which usually, is its damage dealing axie. Paired with Early Bird, it can deal high damage to potentially eliminating your enemy's axie.

This combo will surely render the enemy's damage dealer useless. With this combo, you can target the fastest enemy and apply a debuff that will prevent them from landing critical strikes, along with disabling their horn cards which are their damage abilities mostly.

Backdoor Bird is primarily weak against Frontline or Mid-lane axies. This build has relatively low HP so if it gets eliminated early, then it will be hard for you to bounce backsince your main damage dealer will be knocked out.