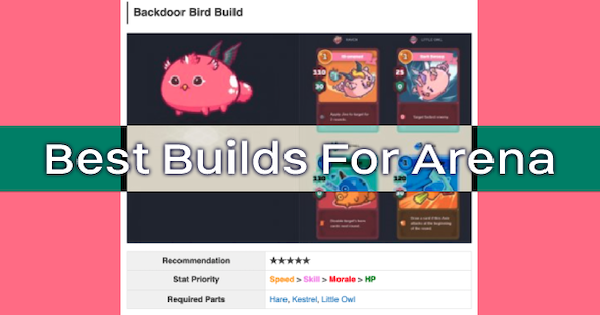 Best Builds for Arena (PVP) Guide in Axie Infinity. Learn about the best builds for PVP, how to win more in Arena, managing your cards, energy count and more!

This build focuses on dealing high amounts of damage and efficient combos. Pure DD relies on high burst damage from the get-go to shatter the enemy's armor for high-chance of winning. This build favors speed as its highest priority.

This build mainly consists of 2 combo setups (Ronin and Imp). RIMP beast triggers a combo which makes the axie an energy powerhouse.

Ronin grants you a guaranteed critical strike paired with another card. Together with Imp (returns 1 energy if landed a critical strike), this combo will grant you high burst damage to potentially killing an enemy axie in a single round while recovering energy at the same time. This build favors morale as its highest stat priority.

Often called "termi build". This build favors the ability "Allergic Reaction" which deals 130% damage against targets that are debuffed. The ability "Chomp" paired with another card, sets up a combo that allows you to get past the enemy's armor and activate Allergic Reaction.

This build usually consists of a Backline Plant paired with 2 damage dealer axies. What's different about this build is that the Plant will be the back-liner of your team.

This build favors on healing abilities, especially with the Pumpkin + Rose bud combo. This team relies on surviving rounds and utilizing the Bloodmoon damage to kill off enemy axies.

This build mainly focuses on drawing cards and forcing the enemy to waste combo cards through your massive shield.

Even with the recent nerf of the Ivory Chop, this build is still one of the best meta builds in the current season because of its powerful reptile cards.

This build focuses on overwhelming your enemy with multiple cards that can strike 2 or more times. This build can be extremely effective if you are also poison on your team since you will be able to trigger it multiple times.

What's strong about Discard Bug is it stuns + discards enemy abilities continuously rendering them unable to make a move. Also, with third glance + sunder claw combined, you can automatically discard 2 enemy cards per round.

How To Win More Matches In Arena Mode

Like any other game, Axie has what you call a "meta". Meta means the most effective tactics available to excel in a game. The current meta in Axie right now is having 1 Plant and 2 Damage Dealers in a team composition.

If you're a beginner, it's best to start out with the meta and eventually try out other builds that you may eventually be better playing at. We don't necessarily have to follow the meta to be good at Axie. We can build our own team to our liking. At the end of the day, it all comes down to our own playstyle.

To win more in Arena, you should study first your team:

Having a strong team comp is not enough to excel in Arena. You also need need to learn and understand the positioning of your axies in the battlefield. Generally, the axie at the nearest front will be the one to take damage first from the enemy team. Here is a basic guide for team positioning:

Similar to Pokemon, each Axie has its own strengths and weaknesses. Here is a chart for Axie Types Strengths and Weaknesses:

When an arena match starts, the first thing that you should always do is check the cards of your enemy. You can do this by clicking on the enemy’s axies. Having an idea on what cards your enemy may have up their sleeves will put you on the advantage because you can anticipate potential combos and moves the enemy will make.

Making The Most Out Of Your Cards

Buffs And Debuffs in Axie

Buffs and Debuffs are positive and negative status effects that can be inflicted on axies. Each Buff and Debuff has their own unique effect that can change the outcome of the battle.

Some cards become extremely powerful when they synergize with another card. These cards are often used together as a combo to maximize their damage and efficiency. Combo abilities may be more effective than when they are casted individually.

For example, one of the most common combo is the Nut Throw & Nut Crack combo. Both cards deal 105 Attack damage, but if they are casted together in one turn, both attacks will deal 120% more damage.

Try to count every turn how much energy your opponent has. This will increase the chances of stealing your opponent's energy especially if you are able to predict if they are going to use cards for the round.

In Axie, players get 3 energy at the start of each match and will gain 2 energy each progressing round. Sometimes, it's best to pass a round to save energy and set up a devastating combo later on.

This way, you’ll have more chances of killing an enemy axie in just a single round by delivering a series of high-attack damage moves, giving the opponent no chance to recover. Passing also gives you an opportunity to wait and gather more cards required for the perfect combo.