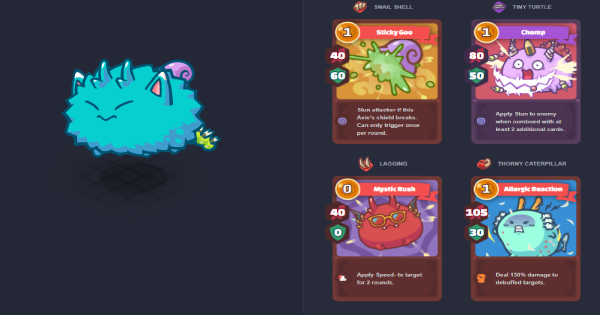 To be be able to maximize Terminator's potential, we need to consider the best stats possible for this build. This build centers around the ability Allergic Reaction which deals 130% damage against debuffed targets. Terminator Build favors HP as its strongest attribute.

Often called "termi build". This build favors the ability "Allergic Reaction" which deals 130% damage against targets that are debuffed. The ability "Chomp" paired with another card, sets up a combo that allows you to get past the enemy's armor and activate Allergic Reaction.

Note that Dusk termi build is stronger than Reptile termi since its faster. This build works well if paired with axies who have debuff abilities.

Best Moves To Pair With Terminator

This card can be a great addition to Termi because of the stun debuff it brings if its shield breaks.

This card can be the high attack damage ability your Terminator has coupled with Allergic Reaction.

These moves serve the same purpose but the difference is one counters melee attacks while the other counters ranged attacks. Both cards can be a great option for Termi.

Chomp paired with these 2 cards can be a devastating combo to the enemy. Applying 2 debuffs which are stun and speed - coupled with a high attack damage in Dull Grip will pack a punch into the enemy's team.

The applied debuff of the Chomp Combo will now trigger the 130% damage bonus of Allergic Reaction. Paired with Sticky Goo, you can in turn reset the stun effect if your shield breaks.

Termi Build works well if paired with axies who also have debuff abilities to continuously trigger the Allergic Reaction effect.

Termi Build is more of a hybrid axie somewhere between the genes of Reptile, Aqua, and Bug. Weaknesses of this build vary depending on the axie's genetic composition.

Dusk termi build is stronger than Reptile termi since its faster while Reptile termi is more of a tank axie because of its reliable health stat.

Beast, Bug, Mech deal 15% more damage to Iterminatorr since its usually a between the lines of Reptile and Dusk axie.