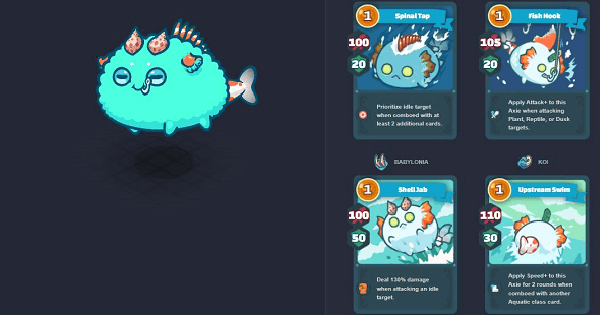 To be be able to maximize Idle Exploiter's potential, we need to consider the best stats possible for this build. This build deals high damage to axies that are idle/not moving (usually the middle axie). Idle Exploiter favors speed as its strongest attribute.

Idle Exploiter build centers around dealing high damage to idle targets. This build deals high damage to axies that are not moving (usually the middle axie).

The key to this build is being able to attack enemy axies with no armor set up, to potentially eliminating it during the round. The disadvantage of this build is when the enemy anticipates the move and sets up its tank as its idle axie.

With Idle Exploiter, the parts that are necessary for an axie to have are Perch & Babylonia. Perch and Babylonia activate the abilities; Spinal Trap and Shell Jab. Without these parts, Idle Exploiter will not work.

This card can seal the deal in completely knocking out the idle axie by preventing it from entering Last Stand plus the damage it brings.

This move can be a viable option for Idle Exploiter. Idle Exploiter has high speed so Flanking Smack can be an effective damage opener.

The ability Spinal Tap allows you to target idle enemies when comboed with 2 additional cards such as Shell Jab which can deal 130% attack damage to an idle target.

The Spinal Trap & Shell Jab Combo plus Fish Hook is a devastating combo for your enemy to deal with. Fish Hook applies the attack + buff to your axie when attacking Plant, Reptile, & Dusk targets. This is an effective combo for shredding the front and mid axies of your enemy.

This variation of the Spinal Trap + Shell Jab Combo is more of a conservative one as you manage to gain energy in order to set up more combos in the later rounds.

Given its low HP, Idle Exploiter can also have a rough time facing Plant, Reptile, and Dusk axies due to its class which is usually Aqua.