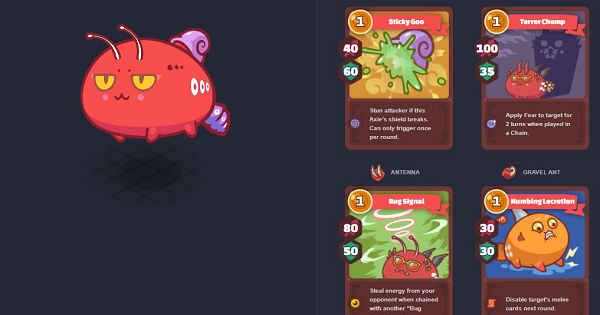 To be able to maximize this build's potential, we need to consider the best stats possible for this build. This build aims to steal your opponent's energy and constantly disrupt their combos with stuns and disables.

The main goal of his build is to use Antenna to steal your enemy's energy and use cards like Sticky Goo and Numbing Lecretion to disrupt enemy combos.

With Antenna Build, the parts that are necessary to have are Bug Signal and Sticky Goo. You will need these parts to survive longer, steal your opponent's energy and disrupt their combos.

You can replace Numbing Lecretion with Anesthetic Bait if you are having trouble fighting against Aquatic and Bird class Axies for an additional stun.

This combo will not only steal your enemy's energy, but it will also disable all melee cards of the enemy Axie for the next round.

This combo gives you a ton of shield and a chance to stun attacking enemy Axies forcing them to miss their attacks.

This build is best paired with other Axies that also have Antenna. Multiple Axies with Antenna will drastically increase your chances of stealing your enemy's energy since they need to be played in pairs.

Antenna Build is mainly weak against Aquatic and Bird Axies. This build relies on stealing Energy and disrupting enemy combos with disables and discards. Since these classes can deal an additional 15% damage because of the class advantage, they won't need to rely on playing combos to kill off your Axies.

Aquatic, Bird, and Dusk axies can deal 15% more damage to Antenna Build since its a Bug Axie.