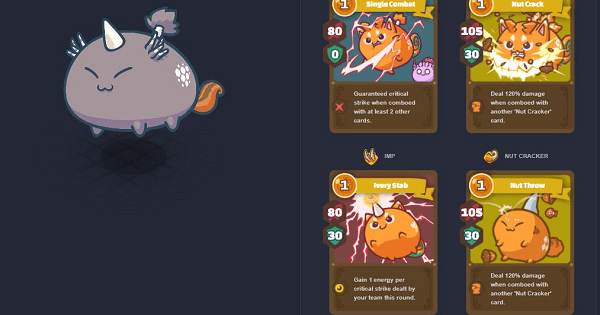 To be be able to maximize RIMP Beast's potential, we need to consider the best stats possible for this build. This build is an energy powerhouse and it's combos will grant you high burst damage. RIMP Beast favors morale as it's strongest attribute.

"RIMP" stands for "Ronin" and "Imp", the signature parts of this build. Both parts enable a powerful combo which turns this Axie into an energy power house.

Ronin grants you a guaranteed critical strike paired with another card. Together with Imp (returns 1 energy if landed a critical strike), this combo will grant you high burst damage to potentially killing an enemy axie in a single round while recovering energy at the same time.

A good alternative for a pure RIMP Beast is a pure Mech axie. Pure Mech is faster that a pure Beast but in turn, you will lose morale.

With RIMP Beast, the parts that are necessary for an axie to have are Ronin & Imp. Ronin & Imp activates the abilities; Ivory Stab & Single Combat. Without these parts, RIMP Beast will not work.

Luna Absorb paired with Piercing sound can be a great set up for your Beast to deal RIMP combo in the succeeding rounds. With these moves, you can absorb and destroy energy at the same time.

Single Combat/Ronin guarantees a critical strike when used with 2 other cards. When paired with Ivory Stab/Imp, it becomes a guaranteed +1 energy card that deals massive damage.

This combo can deal up to 165 damage with each card when used in pairs against Plant, Reptile, and Dusk. Also, since you can have 2 Nut Cracker parts(Tail, Mouth), you can easily complete this combo in your hand.

This is the standard RIMP Beast combo plus Nut Crack ability. What these combo does is burst down enemy Plant, Reptile and Dusk even with high armor.

RIMP Beast can be paired with high HP tank axie and another damage dealing axie with high damage abilities. Tanky Plant & high speed bird or aqua axies can be viable teammates for this build.

This build is your main damage dealer and has relatively low HP so if it gets eliminated early, then it will be hard for you to bounce back.

Aqua, Bird, and Dawn axies can deal 15% more damage to RIMP Beast since its usually a Beast or Mech axie.