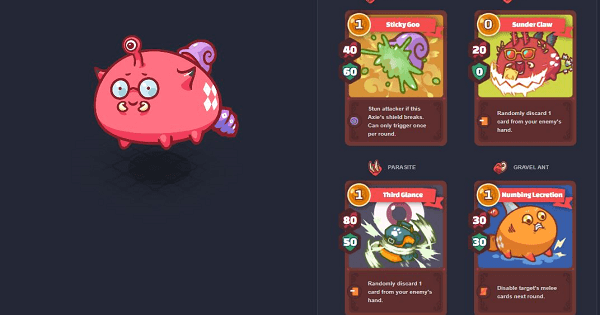 To be be able to maximize Discard Bug's potential, we need to consider the best stats possible for this build. What's strong about Discard Bug is it stuns + discards enemy abilities continuously rendering them unable to make a move. Discard Bug Build favors Morale as its strongest attribute.

This build usually consists of 3 bug Axies. What's strong about Discard Bug is it stuns + discards enemy abilities continuously rendering them unable to make a move.

Also, with Third Glance + Sunder Claw combined, you can automatically discard 2 enemy cards per round.

This card can be a great alternative for the Discard Bug when you want to disable damage dealer Axies' with a single card.

Similar to Numbing Lecretion, this card can also disable multiple enemy cards with a single attack.

This combo is commonly used by Bug class Axies. Its goal is to force the enemy discard all their cards and rely on the 3 cards that they draw every start of the round. With this, it is almost impossible to be comboed since they will discard unused cards.

Anesthetic Bait and Snail Shell are two of the most powerful defensive cards in the game. With this, you can stun an attacking Axie (Aquatic and Bird class for Anesthetic Bait) to immediately shut down their combo. On top of that, both cards provides decent a shield and attack value.

Discard Bug can be paired with 3 bug cards with the same abilities. This team will then just continuously discard the enemy's cards and provide them with stuns some Bug Axies have.

Since this build has a composition of 3 identical Axies namely all Bug types, the difficult part is having no tank. You have to continuously rely on the Third Glance + Sunder Claw combo for the win.

any alternatives for the back if using 2 discard + anesthetic bait?